In this article, we are going to explore the different uses of bamboo in modern Chinese agriculture, its impact on the environment as well as its history in Chinese culture!

China produces and uses so much bamboo (竹子 zhúzi) that the country is sometimes referred to as the Bamboo Kingdom (竹子王国 Zhúzi Wángguó). 40% of all known bamboo species in the world are grown in China, so it’s not surprising that China grows more bamboo than any other country in the world. Today, approximately one fifth of the global supply of bamboo is grown in China, with Sichuan and Fujian being the provinces with the highest total area of bamboo 경작.

Bamboo is the fastest-growing plant on earth. Although some types of bamboo can reach heights of almost 115 feet (35 meters), you may be surprised to learn that bamboo is actually a type of grass and not a tree.

Although bamboo still plays an integral part in Chinese culture today, it was even more important in the past, when it was widely used for many different purposes. 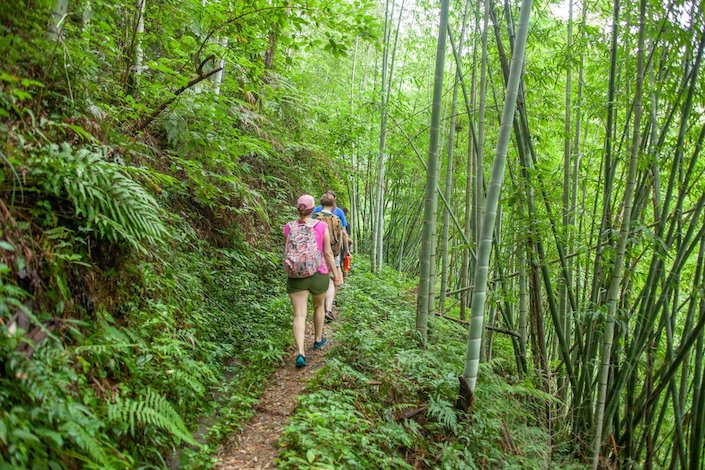 Bamboo forests, like this on in the village of Laozhai (老寨 Lǎozhài) about 2.5 hours outside Guilin, are a common sight throughout China.

Bamboo in China through the ages

Bamboo has an incredibly long history in China. In fact, its use dates all the way back to the 11th century BC. Throughout China’s history, bamboo has been used to create food, transportation, weaponry, housing, instruments, books and more!

Before the invention and use of paper, bamboo slips (简牍 jiǎndú) were used as a writing medium for documents and books. In fact, Sunzi’s masterpiece, 전쟁의 기술 (孙子兵法 Sūnzi Bīngfǎ), which dates back to the 5th century BCE, was originally written on bamboo.

In ancient China, many books and other documents were written on bamboo slips.

Bamboo shoots (竹笋 zhúsǔn) have a long history of use in Chinese cuisine and they continue to play a significant role as a key ingredient in many modern Chinese dishes.

Young bamboo shoots are usually used to add a crispy texture and sweet taste to a dish. Often, they’re used as a side, or to add bulk to stir-fries, soups and other dishes. Pickled bamboo is also a great condiment!

A popular dish in China’s Guangxi province is bamboo rice (竹筒饭; zhútǒng fàn). It consists of a hollowed bamboo tube filled with sticky rice and meat. The bamboo container is believed to add a distinctive flavor to the dish during the cooking process.

Bamboo is a popular ingredient in Chinese cuisine.

Throughout Chinese history, bamboo has been widely used in construction. A versatile building material, it’s been used to create everything from humble bridges to beautiful rooftops for the emperor. Even today, construction sites in both mainland China and Hong Kong sometimes use bamboo as scaffolding.

In the past, bamboo was also used as a mode of transportation. Bamboo rafts were once commonly used for fishing and crossing rivers. Today, it’s still possible to take a ride on a bamboo raft in China. For one of the most picturesque rides in all of China, we recommend rafting down the Yulong River (遇龙河 Yùlónghé) near the town of 양 슈오 어. 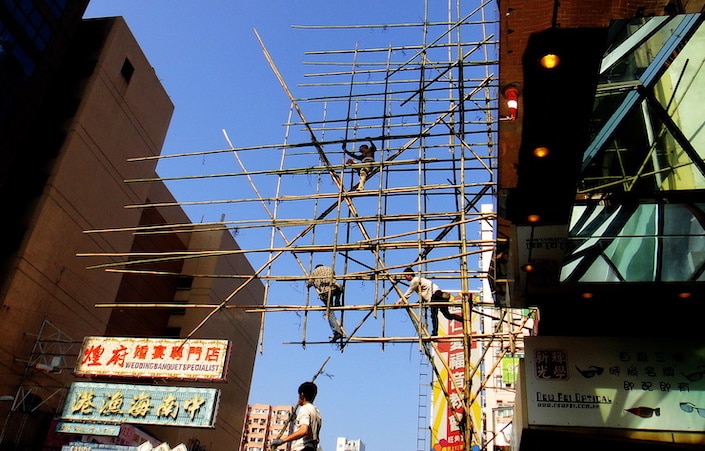 Bamboo scaffolding, which doesn’t conduct electricity, is considered safer than metal alternatives in some settings.

Firecrackers are very important in Chinese culture and are often used during 중국 공휴일 처럼 봄 축제. Some of the earliest Chinese firecrackers were made by packing gunpowder into hollow bamboo stems.

What is the significance of bamboo in Chinese culture?

A symbol of traditional values

Certain behaviors and character traits are traditionally associated with each of these plants. In the case of the bamboo, its strength lies in its grace — it is tranquil, flexible, humble and simplistic, and an emblem of modesty and mental strength. Its deep roots denote steadiness.

Along with the pine and plum blossom, bamboo also sometimes appears as part of the Three Friends of Winter (岁寒三友 suìhán sānyǒu). Each of these three plants is revered for its ability to remain unwithered when the weather turns cold. 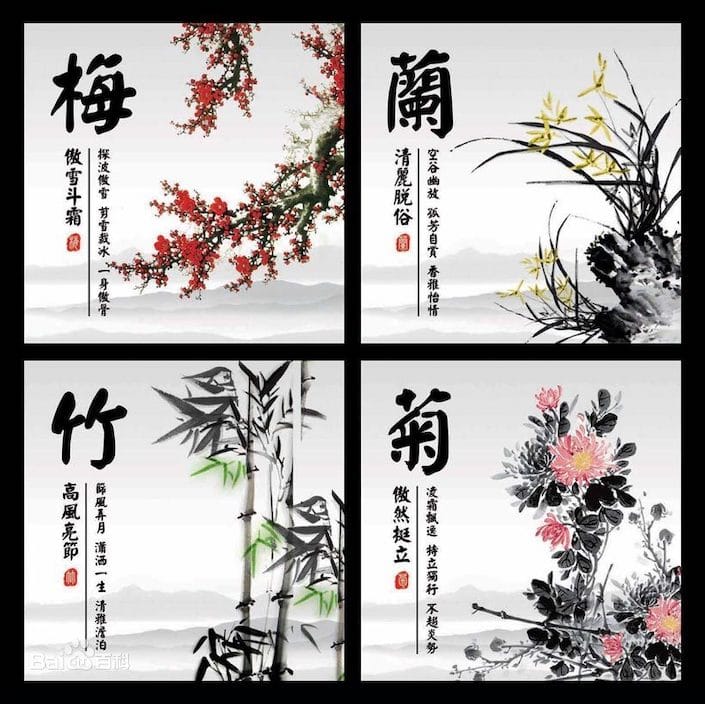 Bamboo is one of the Four Gentlemen, a collection of four plants which together symbolize the four seasons.

Many traditional Chinese paintings (国画 guóhuà) often feature the bamboo plant as the centerpiece. This is because for thousands of years, artists have used the bamboo plant as a motif in their paintings, whether by itself or as part of the above mentioned Four Gentlemen or Three Friends of Winter.

Bamboo is a popular subject of traditional Chinese art.

많은 사람들이있다 중국어 관용구 (成语 chéngyǔ) which reference the bamboo, further showcasing the influence and prevalence of bamboo symbolism in Chinese culture. Here are a few:

Literal translation: When painting bamboo, you have to have an image of bamboo in your heart

Symbolic meaning: To have a well-thought-out plan

Symbolic meaning: The innocence of a child’s play; a couple who grew up as childhood friends 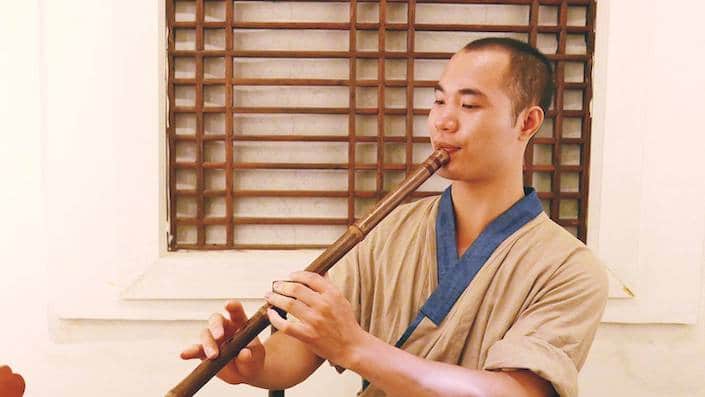 Thanks to its privileged place in Chinese culture, bamboo is frequently referenced in Chinese idioms.

Bamboo weaving is a traditional handicraft in China which involves manipulating bamboo into various woven patterns to create both useful and decorative objects.

Bamboo is frequently used in modern China in order to produce all kinds of furniture and objects for daily use.

However, despite this wide range of products, the production of bamboo furniture still exceeds demand. Despite receiving substantial investment, China’s bamboo furniture market is still a niche.

One cultural factor that has hampered the success of China’s modern bamboo furniture industry is the fact that bamboo is often regarded as a cheaper alternative to “real wood,” instead of as a legitimate building material in its own right. This is especially true since bamboo furniture is commonly associated with rural life and poverty. 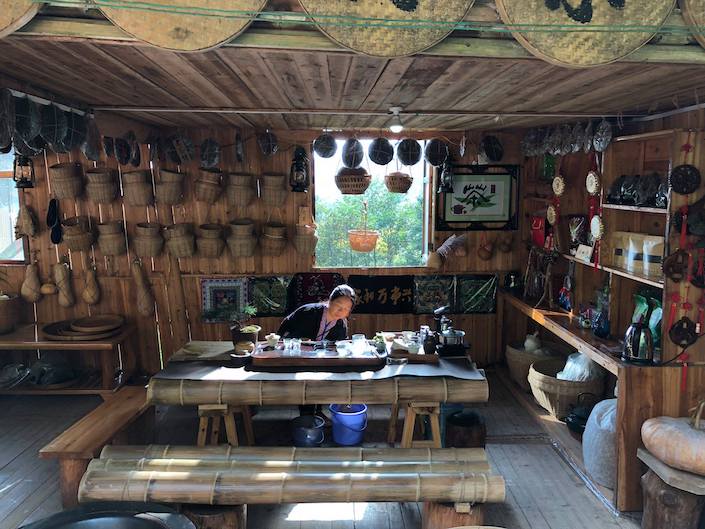 Large bamboo stalks can be used to make attractive and sustainable furniture, like this bamboo bench and table.

Thanks to its biodegradability and extremely fast growth, bamboo is rapidly becoming an “eco-friendly” choice in the textile industry worldwide.

However, although clothes made with bamboo ingredients are frequently marketed as “bamboo clothing,” such labels are technically misleading since raw bamboo fibres are not actually used. Often, bamboo yarn is blended with other textile materials, or is used to create rayon (viscose) which in this case is a (semi) synthetic material.

Nonetheless, bamboo is still a great alternative to other synthetic fibres and plastics, and clothing made from bamboo can be disposed of in an environmentally friendly manner once it reaches the end of its life cycle.

Bamboo textiles also have a strong presence in Chinese rural life, with farmers and fishermen using bamboo strips to create hats and shoes to wear while working in the fields. 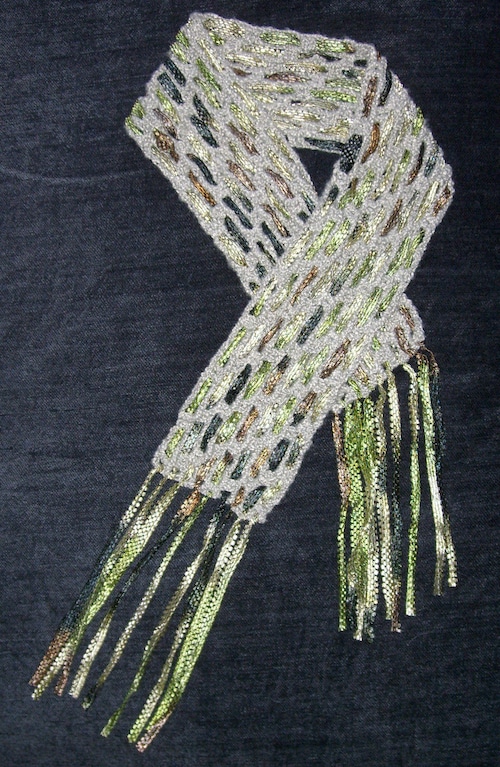 Bamboo fibres can be used to make environmentally friendly textiles.

In 1999, the Chinese government launched the Grain-for-Green reforestation program, with the intention of replacing agricultural land with forest cover in order to restore China’s green landscape and encourage biodiversity.

Many of the restored forests under the program have implemented an agricultural process called monoculture, which refers to growing only a single species. As a consequence of this program, there has been a huge increase in new bamboo forests in China.

Advocates of the creation of these forests hope that they will help further develop the bamboo sector and increase the use of bamboo production for both domestic and international use.

Unfortunately, however, the promotion of monoculture has led to a decrease in biodiversity. Use of monoculture has also reduced the availability of food for wildlife and hurt farmers by decreasing nutrient levels in the soil. All this means that bamboo monoculture may not be ecologically sustainable in the long term unless it is properly managed. 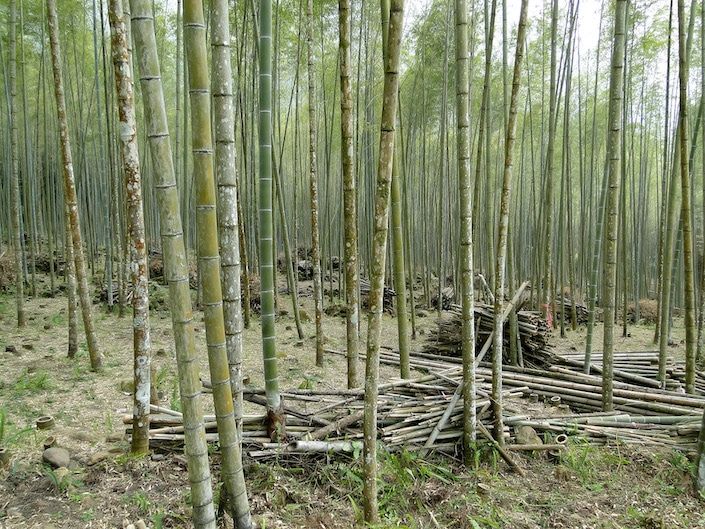 Huge forests of bamboo were planted throughout China as part of the Grain-for-Green reforestation program.

The giant panda (大熊猫 dàxióngmāo) is a symbol of friendship, peace and harmony in Chinese culture and emblematic of China as a country. In fact, there is even such a thing as Panda diplomacy — the practice of sending giant pandas to other countries as a way to establish peaceful diplomatic relations!

The bamboo plant is one of the panda’s main sources of food, so much so that pandas are sometimes referred to as 竹熊 (zhúxióng; bamboo bear). On average, pandas consume about 30 pounds of bamboo a day. Bamboo is also a critical source of food for red pandas and golden monkeys, and thus plays a crucial role in the maintenance of wildlife populations.

A huge part of China’s reforestation plans were also intended to support the panda’s natural habitat. The panda and the bamboo plant go hand in hand, and without an abundance of bamboo, China’s recent panda conservation efforts would have not been as successful as they have been. 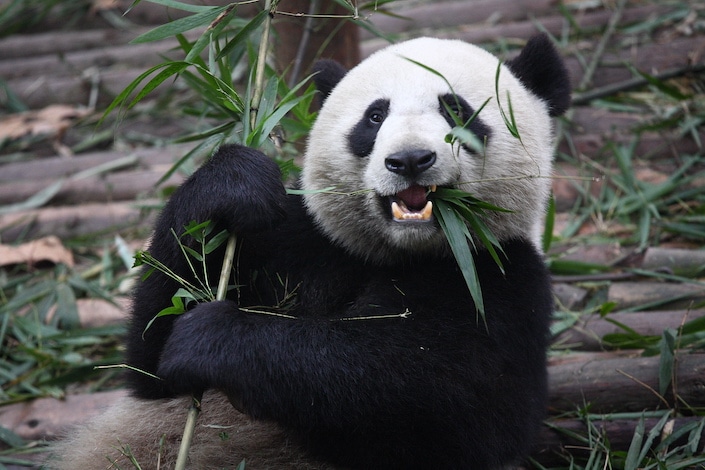 Bamboo is one of the main sources of food for pandas.

When people think of China, they usually conjure up images of cuddly pandas, the 만리장성, and bamboo forests, and they are not wrong! Bamboo has served the Chinese tourism industry well in many ways.

Every year, hundreds of thousands of domestic and international tourists visit Chinese bamboo forests, one of which is the Shunan Bamboo Forest (蜀南竹海国家公园 Shǔ nán zhú hǎi guójiā gōngyuán) located in Yibin City, Sichuan Province. This national park holds the largest and oldest bamboo forest in China. Covering an area of 120 square kilometers, it hosts many different bamboo species and a variety of other attractions such as a bamboo museum, hiking trails, waterfalls and caves.

The Anji Bamboo Forest (中国大竹海 Zhōngguó Dàzhúhǎi) is another great destination that even includes a roller coaster amongst its many attractions! It was also used as a filming location for the legendary movie Crouching Tiger, Hidden Dragon (卧虎藏龙 Wòhǔ Cánglóng).

재미있는 사실: In 2003, Yunnan Normal University’s Bamboo Institute announced that the world's tallest bamboo plant is situated in an artificial forest within the province. It is 46 meters tall and weighs almost half a ton! 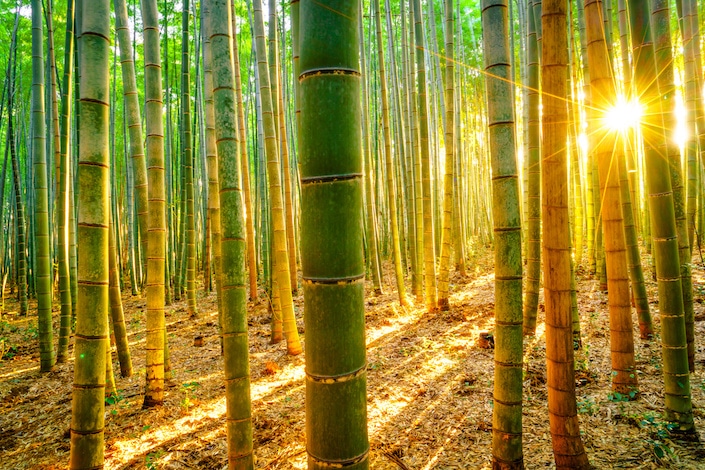 Visiting a picturesque Chinese bamboo forest is a great way to relax while communing with nature.

The future of Chinese bamboo

With the help of better technologies and the rise of renewable energy sources, bamboo is proving to be a better, more sustainable approach to the production of a variety of different products. Its extremely quick growth and versatility means that it has an important role to play in creating a more eco-friendly world. Despite its benefits, however, there are still potential downsides that need to be carefully planned for and considered.

What is clear, however, is that the bamboo plant’s beauty lies in its simplicity. No matter what its future holds, bamboo’s place is deeply rooted in Chinese traditional culture. 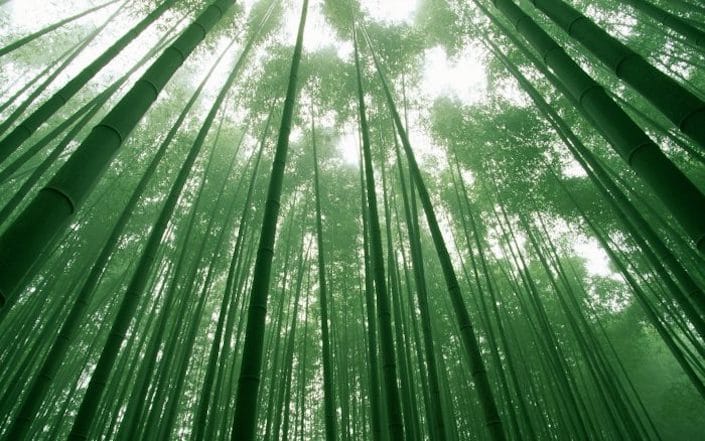 Thanks to its elegance and simplicity, bamboo occupies an important place in Chinese culture. 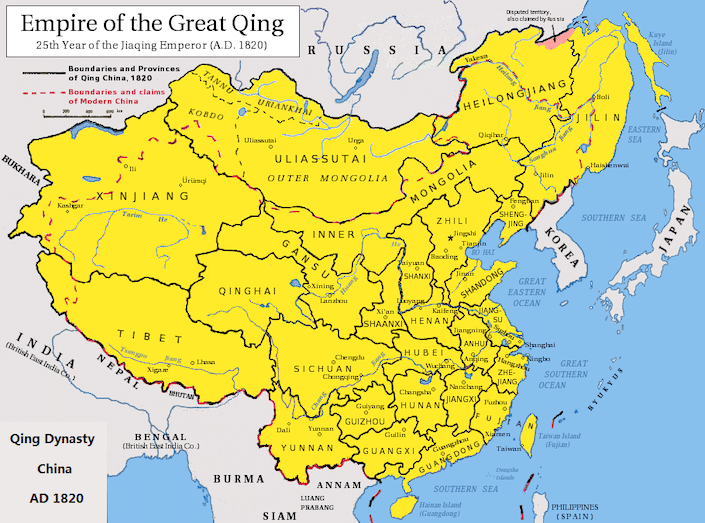