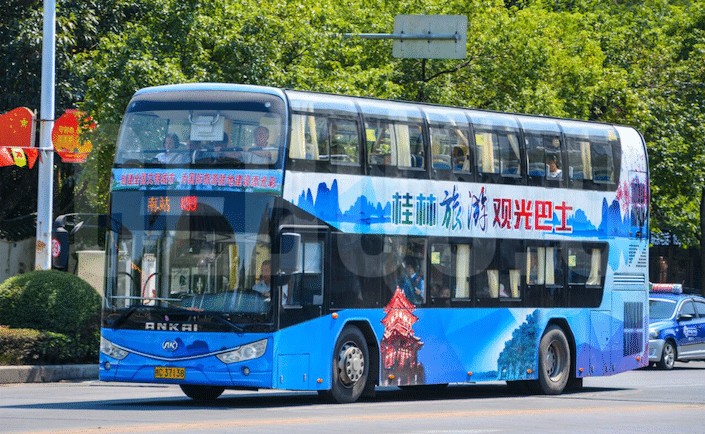 是... 的 (shì...de) is a common grammatical structure in Mandarin Chinese. This pattern can be used in a variety of different ways. It is frequently used to emphasize details like the time or place at which something was done. It is also used in questions.

In this explanation, we will focus on how to use this construction to talk about what jobs people do.

To describe what someone does for a living, use the following structure:

In this structure, the verb and object explain the job that is done by the subject.

Mr. Liu is a bus driver.

Here, Mr. Liu is the subject. After the subject comes 是 (shì; to be), followed by the verb 开 (kāi; to drive) and its object, 公共汽车 (gōnggòng qìchē; bus), followed by 的 (de). This structure is used to tell the reader that Mr. Liu drives buses for a living.

To remember how to use this construction, you can think of 是 (shì) and 的 (de) as two bookends placed on either side of detailed information about what job the person mentioned at the start of the sentence does.

Like the first example above, in this sentence, the two components of the 是...的 (shì...de) structure act as bookends surrounding a description of what the subject “我” (wǒ) does for a living, namely 教英语 (jiào Yīngyǔ).

As a beginning student of Mandarin Chinese, paraphrasing is an essential skill that will allow you to begin to communicate with native speakers in your own words even if your Mandarin vocabulary is still quite limited. The 是...的 (shì...de) pattern is useful tool that can help you use paraphrasing to talk about a variety of different professions without actually knowing the formal names of each one.

The aspect particle 着 (zhe) is useful if you want to talk about an action that continues for some time instead of something that started and stopped immediately.

Let’s take a look at an example:

I need to go in to buy some stuff, so you watch the baby for me.

In this example, the speaker is planning to go into a store to do some shopping, and he needs the other person to watch his baby while he does so. Since the action of watching the baby will go on for some time, 着 (zhe) is appropriate to use in this situation.

In many instances, adding 着 (zhe) after a Chinese verb is similar to adding -ing in English when describing an ongoing action such as talking, watching or singing. Thinking about 着 as similar to -ing is especially useful when you want to give some background information and show the context in which another more discrete, non-continuous action was performed.

When using 着 (zhe) to describe an ongoing state, use the following structure:

Let’s look at an example to see how this works:

Holding a cup of tea and smiling, he said, “Please get in, little guy.”

In this sentence, two verbs are being used to describe an ongoing state: 拿 (ná) and 笑 (xiào).

Adding 着 (zhe) after these verbs tells the reader that holding a cup and smiling were ongoing actions that describe the state of the person “他” (tā) at the time that he performed another discrete, non-continuous action designated by the action verb 说 (shuō).

Result complements are used in Chinese to describe the result of a verb. They are an extremely common aspect of Chinese grammar. Some of the most frequently used result complements include 见 (jiàn), 到 (dào) and 完 (wán).

The verbs “to look” and “to see” in English are a case in point. It is possible to look without seeing anything. If you want to say that someone was looking for something and then actually saw what they were looking for, you would use the verb “to see” to explain the results of their visual search.

In Chinese, however, the single verb 看 (kàn) encompasses both the idea of looking and seeing. Therefore, when you want to say that someone actually saw something in Chinese, instead of using a different word, you need to add a result complement after the verb.

When we arrived at the next stop, Mr. Liu saw an elderly grandmother slowly boarding the bus.

Because 看 (kàn) in this sentence doesn’t just mean “to look” but rather “to see,” it is necessary to add the result complement 见 (jiàn). In this case, the writer chose to use 见 (jiàn), but it would also be possible to express the same meaning using 看 (kàn) and the result complement 到 (dào), as in 看到 (kàn dào).

Another Chinese verb that frequently requires a result complement when talking about the result of the action it describes is 听 (tīng).

In English, we have the verb “to listen” and the verb “to hear.” It is possible to listen without hearing anything, but if we want to talk about listening with a successful result, we say we “hear” something. Because there is no such distinction in Chinese, it is necessary to add a result complement to create the Chinese equivalent of “to hear.”

I just heard my mother’s voice.

In this sentence, the speaker is talking about the successful result of listening. In other words, she wants to say that she heard something. Therefore, adding a result complement to the verb 听 (tīng) is necessary, and in this sentence, the writer chose to use 到 (dào).

Begin quiz once you have completed the above reading.
33

HSK 2 | My Chinese Homestay Family
by The CLI Team
After a long flight, I finally arrived at the airport. As I began searching for my Chinese homestay family, I felt tired and also a little nervous. I didn’t know what to expect.

Learn Chinese in China and join the CLI community!
Based in scenic Guilin, China, CLI is a leading center for Chinese language and cultural studies.
Learn Online
Study in China