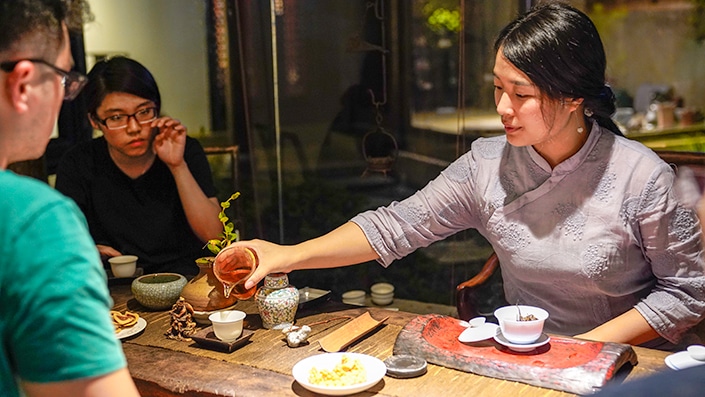 In Chinese, the adverb 太 (tài) is commonly used to modify adjectives. It is similar to the English words “really,” “very,” “so” and “too”. When used in this way, it follows the pattern below:

This structure is used with Chinese adjectives to intensify their meanings.

This girl is really beautiful!

When 太 (tài) is used with adjectives that generally have negative meanings like 热 (rè; hot) or 累 (lèi; tired), it intensifies the negative meaning of the sentence. In this case, this structure is frequently used to complain about something that the speaker dislikes.

While the most common and basic use of 太 (tài) is with adjectives, it is also possible to use 太 (tài) with certain verbs. These verbs include modal or “helping” verbs such as 会, as well as some psychological verbs like 爱 (ài; love) or 想 (xiǎng; to want to, to wish).

When used to modify verbs, 太 (tài) follows this pattern:

My dad isn’t too happy.

In this case, 不太 (bù tài) is paired with the adjective 高兴 (gāoxìng; happy). Notice how no 了 (le) is needed at the end of the sentence.

Note that the Chinese adverb 很 (hěn; very) is often used to intensify the meaning of adjectives and certain verbs in much the same way as 太 (tài). However, 太 (tài) is the stronger of the two adverbs. In short, if you only want a little emphasis, use 很 (hěn), but if you want to go for maximum intensity, use 太 (tài).

In Chinese, the auxiliary or “helping” verb 能 (néng) is generally translated into English as “can.”

When using 能 (néng) in this way, the following structure is used:

Let’s look at an example of how to use 能 (néng) in a sentence:

He can eat six bowls of rice.

Translating the above sentence is relatively straightforward. Eating six bowls of rice isn’t generally something that one needs to study or learn about to be able to do, so using 能 (néng) works well here.

My dad can drink a whole lot of tea in a day.

In this sentence, 能 (néng) is used to state that the speaker’s father has the ability to drink a lot of tea in a day. Since the action of drinking tea doesn’t generally require special study or training, 能 (néng) is the appropriate verb to use.

能 (néng) can also be used to talk about whether or not something is possible. It is commonly used to ask polite questions that would generally involve the phrase “Would it be possible” in English.

Would it be possible for you to help me buy a few things?

When paired with 不 (bù; not, won’t), 能 (néng) is also frequently used to say that something is forbidden or should not be done.

Note that as you continue to study Chinese, you are likely to encounter two other auxiliary verbs that are frequently used to mean “can.” These verbs are 会 (huì; can, know how to) and 可以 (kěyǐ; can, to have permission to).

Although these verbs are sometimes used in a way that’s similar to 能 (néng), they frequently have different meanings, so it’s essential to familiarize yourself with the differences between these three helping verbs.

了 (le) is a very commonly used particle in Mandarin and an important component of Chinese grammar. Due to the fact that it is used in many different ways and can have many different meanings depending on the context, 了 (le) can be confusing for beginners.

When using 了 (le) with adjectives to indicate a change in state, follow this pattern:

Because the 了 (le) in the above example is used to indicate change, the English translation “Mom is happy” does not actually convey the full meaning of the sentence.

Due to the use of 了 (le) here, it might be more accurate to translate the sentence as “Mom wasn’t happy earlier but now she is.” Earlier, she may have been sad, angry or simply indifferent, but now her emotional state has changed and she is happy.

In addition to its use with adjectives, 了 (le) can also be used with verbs to indicate a change in the overall situation that’s being discussed.

The simplest structure for using 了 (le) with verbs is:

In this sentence, 了 (le) is used to express a change in the father’s situation or state. The use of 了 (le) after the verb 睡觉 (shuìjiào; to sleep) tells readers that he was awake recently but now he has fallen asleep.

Sometimes, the grammar of sentences containing the 了 (le) particle can be more complicated. For example:

We are out of tea; We don’t have any more tea in the house.

In this example, 了 (le) does not come directly after the verb 有 (yǒu). Instead, the object “tea” comes between the verb and 了 (le), but the overall effect still works to indicate a change of state.

Due to the use of 了 (le) in this sentence, we know that the speaker used to have tea in his or her house. However, that situation has now changed and the tea is all gone.

Begin quiz once you have completed the above reading.
86

HSK 2 | My Chinese Homestay Family
by The CLI Team
After a long flight, I finally arrived at the airport. As I began searching for my Chinese homestay family, I felt tired and also a little nervous. I didn’t know what to expect.

Learn Chinese with a live teacher. Sign up today!
Your Chinese teacher will call you on Zoom or Skype for your Chinese lesson.
Learn More Now
Try For Free