The Rise of Soccer in China

As a student of any language knows, practice is the most important key to retention. By finding fun and interesting ways to connect what you learn in the classroom with your life outside the classroom, fluency will come fast and naturally.

“Playing any sport with people of another culture is memorable because it allows you to relax, to be competitive, and to get to know your peers on another level.”

Based on the current state of the Chinese national soccer team, some may find it hard to believe that the sport’s origins can be traced back two thousand years to an early Han Dynasty military drill called “Tsu’ Chu.”

Despite this historical connection, China’s national soccer ambitions have long been unachieved. Within the past 30 years, the Chinese Men’s Soccer Team has only qualified for the World Cup tournament once – and without scoring a single goal.

In February of 2015, President Xi Jinping and China’s central reform group placed this national soccer crisis at the top of their priority list. A comprehensive plan that consists of constructing over 20,000 new soccer fields and adding soccer to the nation’s educational core curriculum has been signed into action.

Reverberations from this national soccer reform can be felt all across the country, as young children put down their schoolbooks and lace up their cleats.

Our hometown of Guilin is no exception. During the afternoons, the Running Horse Soccer Fields (跑马球场), situated next to the CLI Learning Center, are crowded with young players dribbling through a maze of cones to the screech of their coach’s whistle.

At night, cheers from family and friends can be heard as the city’s amateur league teams face off against one another in friendly exhibition games – usually resulting in the losing team covering the cost of the field. 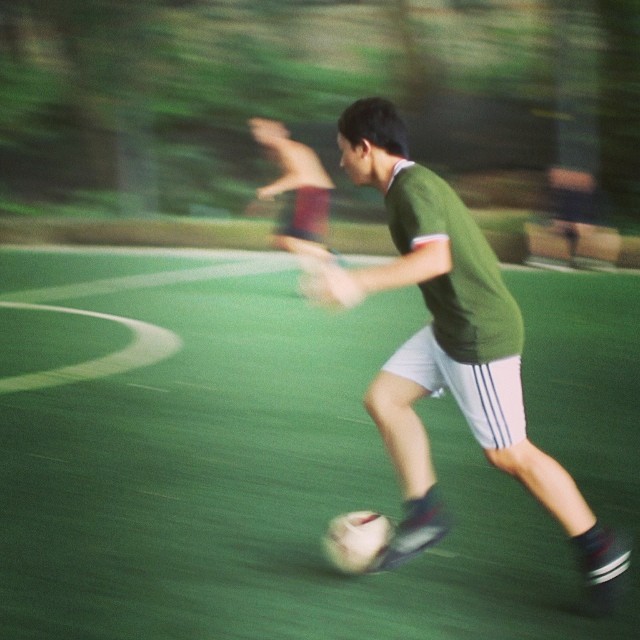 “It’s a fun way of getting to know people outside of the classroom and using your language skills in a relaxed, real life environment.”

With soccer mania spreading throughout the country, CLI is happy to ride the wave of excitement. Every Sunday afternoon, CLI students, teachers, and staff come together to play a friendly exhibition game.

“It’s a fun way of getting to know people outside of the classroom and using your language skills in a relaxed, real life environment,” says Roger Gildersleeve, a summer 2015 Immersion Program student. Roger goes on to explain, “Playing any sport with people of another culture is memorable because it allows you to relax, to be competitive, and to get to know your peers on another level.”

Although the China Men’s National Soccer Team may not feel the effects of this reform until 2022, we in Guilin can still reap the benefits of immersing ourselves in a familiar game through a Chinese lens.