Mark Robinson, founder and president of HandicappedPets.com and the inventor of the Walkin' Wheels adjustable dog wheelchair, was initially motivated to learn Chinese strictly for business reasons. He wanted to better communicate with Chinese manufacturers. However, Mark quickly realized that learning about Chinese language and culture provided him a sense of discovery and enjoyment other subjects simply couldn't provide. Below, Mark shares one of his favorite cultural exchange moments from studying in Guilin.

The Adventures of Living in China

One of the highlights of my stay in Guilin was the Sunday I spent going to English Corner. Sunday was a warm and sunny day. People still had their jackets on, but the sun was out and you could see a few patches of blue sky peering through the clouds.

My friend Edwin in Nashua recommended I meet some of his friends while staying in Guilin. They are the organizers of the Guilin English Corner that meets every Sunday at 10 AM. Like most of my excursions I had no idea what to expect.

Edwin had given me the QQ (China’s popular instant messaging software) address of Lisa, who sent me the location, in Chinese, of the place I was to meet them. I carefully copied the characters for the address on notepaper to give the taxi driver. He dropped me off about 30 minutes early and I went in search of breakfast.

Looking through American eyes I saw a dirty, open storefront where a toothless old man takes 3.5 RMB (about US$.56 cents) from the dozen or so people in line. As they get to the window, a matronly woman spits a few questions then serves a bowl of noodles from a makeshift pot adding chunks of brown stuff, a handful of green stuff, and a spoonful of balls of something-or-other. The people take the bowls to a table with a dozen cups of condiments, add several, and then sit on kindergarten-style plastic stools on the curb where they prod their food with chopsticks until it slides into their mouths.

My turn. She asks her questions. I nod and say "hào" (good). Sometimes you can nod and say "hào" and everything works out fine, no luck this time. She asks again. I have a line in reserve, just in case. "Wǒ shuō zhōngwén shuō de bù hǎo, kěshì wǒ hěn è." This translates roughly to, "I cannot speak Chinese well, but I am very hungry."

Success! She smiles, chuckles, and points to various pots and I keep saying "hào" as she adds a spoonful of their contents to my bowl of white rice noodles. There are four kinds of meat on the cutting board. She waves her finger and I point to one – pork, I'm guessing (guessing is always an adventure). I added a few condiments like I watched others do, found a stool, and began my chopstick attack. I'm good, but the noodles were better and I spent the next 15 minutes slurping up an incredibly delicious breakfast. 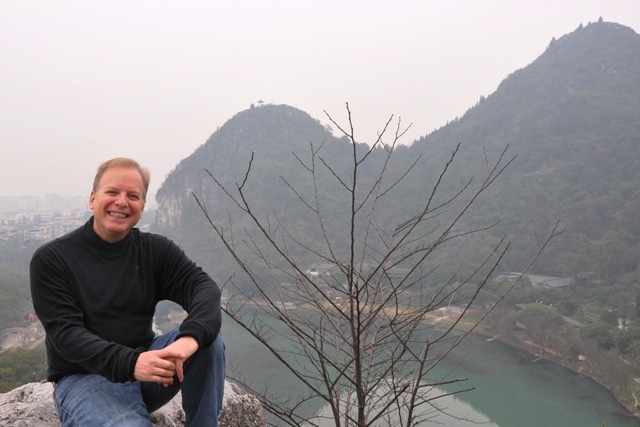 Learning Chinese makes it easier to connect with  Chinese people, culture, and history

A quick side note, as I'm sitting on a large rock riverbank writing this on my iPad four young boys, maybe 6 - 8 years old, just came up to me, tentatively, oozing curiosity. "Nǐ hǎo", I said with my most friendly smile. One child answered, "Hello". They giggled, started to back away and I answered, "Hello, how are you." They thought this was hilarious and answered, almost indistinguishably, "Fine thank you. How are you?" (more about this exchange later...) and ran off down the beach laughing.

The English Corner was wonderful! About 50 people of all ages met outside on the local library steps. Lisa and Ammi introduced themselves. Chinese people choose English names because we can neither remember nor pronounce their real names. This group, some of whom can speak only a few words of English, others almost fluent, meets for no other purpose other than practicing English.

Immediately, I was the star of the show. I was surrounded by people introducing themselves. The standard introduction was this:

They are taught this from an early age as a polite introduction. Much like the boys on the riverbank I mentioned previously, if they can only say a few English words, these are they.

Mothers would push their young children up to me and say, "Talk to him. Ask him where he is from. Ask what his name is." They would dutifully try, usually succeeding quite well. Some of the older boys and girls were able to carry on a conversation and took this opportunity to do so. 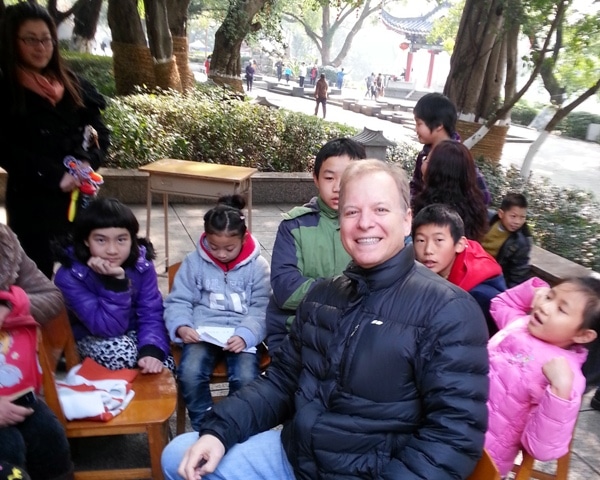 People settled down and the speech portion of English Corner began. People would come up to the microphone and give a one or two paragraph speech about their upcoming vacation. One 8-year-old girl read a prepared speech about how we have to take better care of the planet. Another young boy sang a "Happy New Year" song.

Then they asked me to say something. I said a few words about the designated topic: winter vacations in America. I was asked questions like "What did you do for Christmas?" and "What do you think of National Day?”, which someone else corrected as Independence Day. They all wanted to have their picture taken with me. I felt like a movie star. 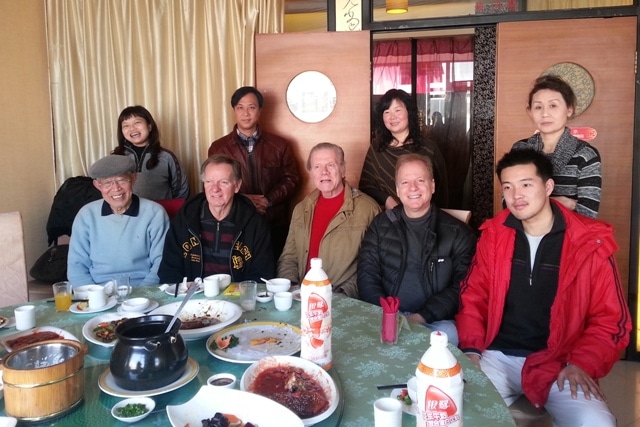 Mark enjoying a cultural exchange over some traditional Chinese dishes

Afterward, they gave me a wonderful lunch, took more pictures, and we continued our discussions in English, Chinese, and strange combinations of the two.

As I learn more of the Chinese language, it somehow brings me closer to the people I'm passing on the street. Although this is my sixth trip to China, I've never felt as connected as this. Many ancient wisdoms speak of the power of knowing a name. Indeed, walking through the woods is a different experience when you can name each of the plants and trees you pass. Just so, walking in the streets of China, knowing a few of the words I overhear and having the ability to read bits and pieces of the signs I see brings me closer to my surroundings. The world is more in focus.