I arrived at my temporary home in the beautiful city of Guilin on January 30th—a week before my Study Abroad semester at the Chinese Language Institute was set to begin. I came to China as a 21 year old college kid, with no firsthand knowledge of Chinese culture and language and no experience traveling in the country.

These small details however did not deter me from spontaneously taking a three-day solo trip to the “nearby” city of Kunming. I was told the best (and cheapest) way to Kunming was via train. And after hours of wandering the city of Guilin in search a ticket agency where English was spoken, I was able to secure a roundtrip hard sleeper ticket.

When I stepped onto my first Chinese train, I soon became the unofficial bag boy of my car, due to my height and because the overhead storage compartment was unreachable for most of my fellow passengers. As the trip progressed I was introduced to a very shy boy whose parents insisted that he practice his English. I also took this opportunity to try to practice my Chinese, but my vocabulary of “ni hao” and “xie xie” (hello and thank you) were soon exhausted.

When nighttime arrived I collapsed on the fittingly named “hard sleeper” bed, and soon drifted off into a sleep disrupted only by crying babies and the numerous train stops along the way. 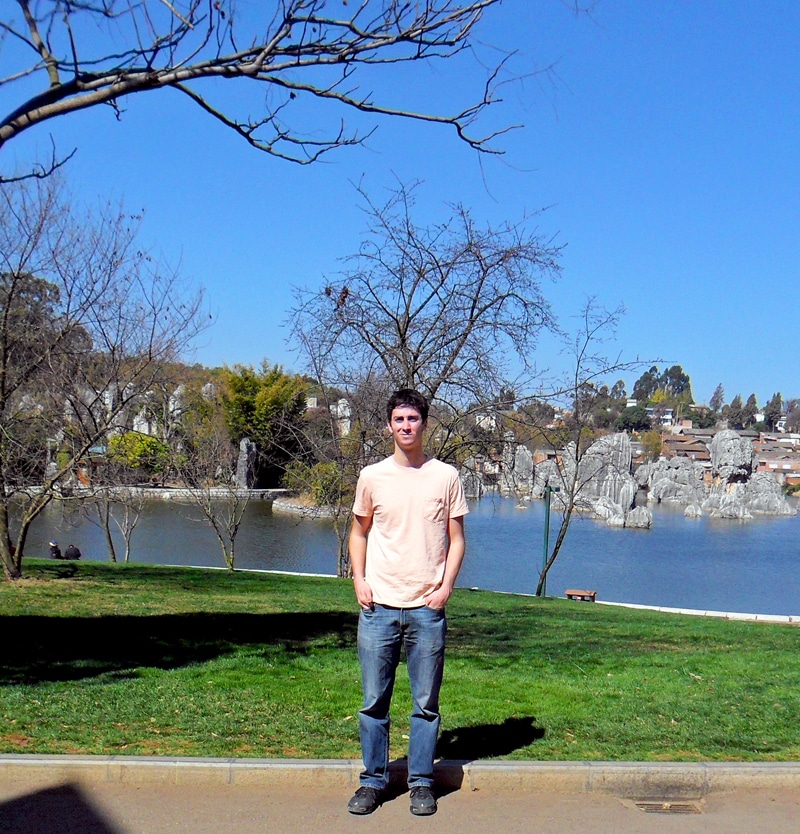 When the 15-hour train ride that can best be described as magical had reached its conclusion, I arrived in the “City of Eternal Spring,” feeling accomplished, exhausted, but most of all, starved. It turns out you shouldn’t head into a nearly day-long voyage without any food supplies. So I did what any stereotypical American college student would do: I went off in search of some comfort (western) food as a much needed pick-me-up.

As luck had it, I came across two men from England and Germany, respectively. After briefly inquiring about their purpose in China, and more importantly the whereabouts of the nearest western café, I was invited to join them on a trip the next day to the tourist spots of Stone Forest and the Jiuxiang Scenic Area. This was not a part of my original plan which was to stay in Kunming for a day and then travel to the tourist city of Dali. But as they say, when in China, follow the rich investment bankers.

These men not only offered to take me along with them, but they paid for the entire day’s worth of events which was fairly pricey. I have since reflected on this unexpected form of kindness and I have concluded that they simply must have felt sorry for the poor, ragged looking college student. Regardless of the reasoning, their generosity is something I will not forget. 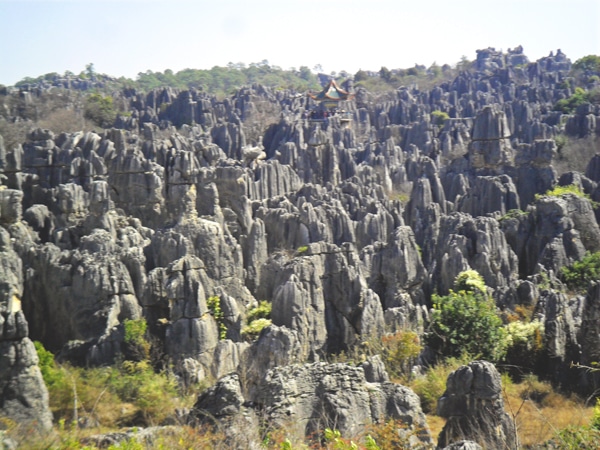 We set off early Saturday morning in a rented car taking the hour plus trip to Stone Forest. I was able to get a firsthand look of the towering Yunnan Mountains which were quite different from the picturesque Karst Mountains of Gaungxi. I arrived to the UNESCO World Heritage Site with admittedly no knowledge of what “Stone Forest” actually was, of where precisely in the Yunnan Province I was, and even who I was exactly with. But any remaining doubts of my decision to embark on this random journey were put to rest when I got my first glimpse of this stone forest. These tall oddly shaped rocks protruding from the ground were a sight I had never seen or even imagined.

We then traveled to the Jiuxiang Scenic Area with the main attraction being a unique set of caves that were marvels in their own right. At the end of our trip my hosts and I parted ways—with them heading to their 5 star hotel overlooking the peaceful Green Lake, and me heading to a very unique youth hostel overlooking the 5 star hotel—and I expressed my sincere gratitude for all they had done. 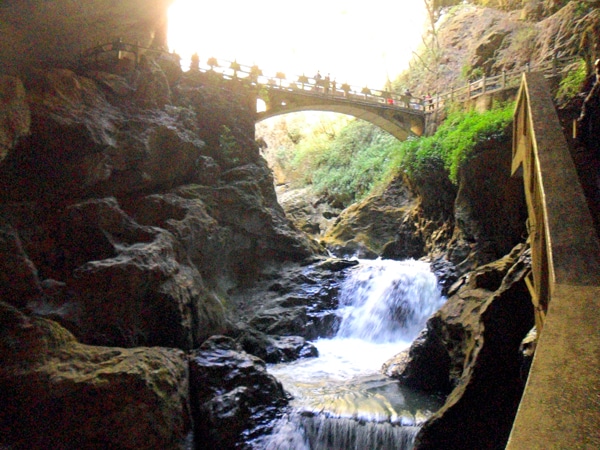 My last day in Kunming was spent attempting to take in the city to the fullest while enjoying the sunshine and blue sky, both of which I had learned are hard to come by during winter in China. In the morning I went to the famous Kunming Zoo which houses over 5,000 animals. Despite the unique set of creatures all around us, it became apparent from the stares and exclamations of “ni kan laowai!” (look at the foreigner!), that I was as much an attraction to the visitors as the animals. I discovered that this attention is not given as a form of animosity nor admiration, but merely as curiosity.

After the zoo trip I relaxed the remainder of the day at the famous Cuihu Park (Green Lake Park) where I witnessed local people doing tai chi, singing, dancing, exercising, and feeding the countless birds surrounding the lake. That night I went to a local café where I met a small group of English-speaking local college-aged kids who saw this lonely laowai sitting by himself absorbed in his Kindle. They invited me to join them and immediately bought me drinks. Good luck strikes again!

The next day I set off for Guilin feeling fully relaxed and accomplished, and ready to take on the real purpose of my Chinese trip: Mandarin! As I lay on my hard sleeper on the return voyage reflecting on my experiences, I thought about how truly unpredictable it all had been. And nearly two months later I can say with full confidence that the word “unpredictable” perfectly describes my time here in China: mostly random, always confusing, but never dull.
Read more CLI Perspectives stories here!