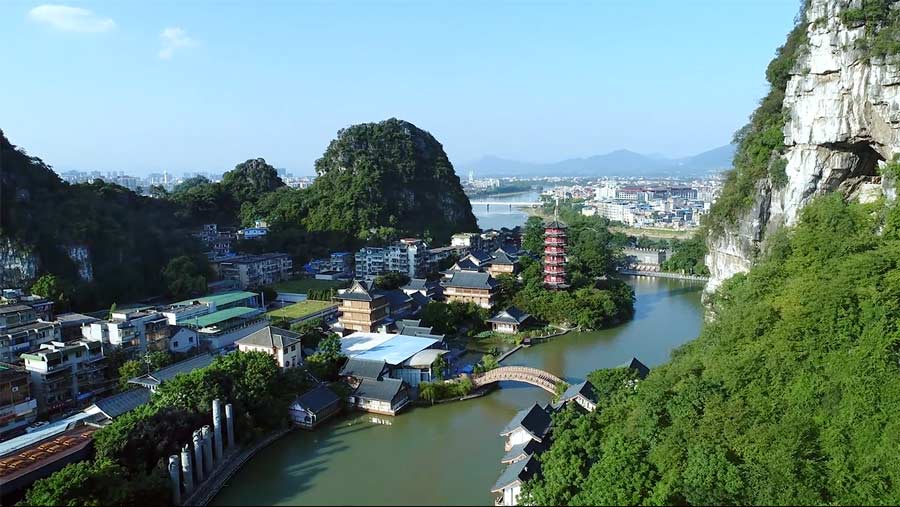 The eighth installment of CLI Perspectives is written by Immersion Program student Jason Rogers. Jason shares his story of trekking the Guilin countryside on bicycle. His 10-speed provided a front row seat to Chinese language and culture. Check out what Jason saw from the back of his trusty steed.

Chinese Culture on a Galloping Bicycle

The last time I rode a bicycle was over a decade ago, and it ended in the scar I still have on my right knee. So when Molin, a cycling enthusiast and one of the teachers at CLI, invited me to join her on a “quick, two hour” bike ride through the admittedly beautiful countryside surrounding Guilin, I agreed.

After renting bicycles and, thankfully, helmets from a local bike shop for 30 RMB (about five dollars American) we set out. Pedaling along in the bike lane alongside other cyclists and scooters, I noticed something: no one was looking at me. No one hardly seemed to notice I was a foreigner; I was just another soul with somewhere I needed to be, another beat in the collective heart of China. Shopkeepers watched me from their corrugated storefronts and their eyes seemed to understand. It was humbling and exhilarating.

After about forty-five minutes of pedaling along the freeway, Molin and I turned off the paved road and onto a dirt trail. Except for occasional scooters or goods trucks, we were alone with the mountains. They rose up on either side like distant giants just visible in the mist. This is a place far older than me as a man and far older than Men. As Americans we rarely get the opportunity to experience this sensation, if we ever do. We’re told every day how important our affairs are, how urgent it is to drive the best car and drink the coolest cola. Looking at these mountains was like looking up at the stars. It’s a refreshing check on our bravado, a silent suggestion that maybe there are things bigger than us.

Eventually the trail led to a village. “Village” is a term that may not be appropriate. Stone doorways framed wild chickens and old men’s cigarettes as they watched us pass. This was a place that almost never saw outsiders. But despite this fact, every “ni hao” was returned with a smile, and those brave enough even offered a “hello”. They weren’t afraid of us; they were happy to have us.

Even this trail, too, ended, and following a village girl who had volunteered to show us the way, we carried our bikes on our shoulders through rice fields and irrigation channels. Finally we came to a river where a ferry was waiting to take farmers across to another village on the other side. We paid the fare, smiled at the looks of disbelief from locals who had never seen an outsider, and boarded the ferry. Old fisherman on driftwood rafts smoked cigarettes and contemplated the river.

We disembarked on the other side and parked our bikes with the permission of a friendly shopkeeper. We browsed the different wares they had for sale and had a lunch of rice and pumpkin greens in a local hangout. Soon it was time to start the long ride home.

When I finally dragged my tired legs up the steps to my room at CLI, none of this had sunk in. I was tired: I knew that. But waiting just on the periphery of my thoughts was the absolute certainty that I had just experienced something that everyone should, at least once. Once in your time on this planet, realize that your life is not more important than the rice fields, that the river doesn’t care what you think of it, and that the mountains don’t know your name. For this, I’m grateful to Guilin.