Chinese etymology is actually easier to grasp than it might first appear. Learning the origins of Chinese characters is arguably one of the best ways to gain further mastery of the language. Join us as we tackle the meaning of the term “etymology,” its history in the Chinese context, some tips for analyzing characters, and more. Climb aboard!

Etymology is the study of the origins and original meanings of words.

Sometimes this involves investigating a particular word’s foreign ancestry, but it might also mean examining the previous incarnations of the word as it was recorded in ancient literature. At other times, it refers to tracking the changes in how a word was and is pronounced. 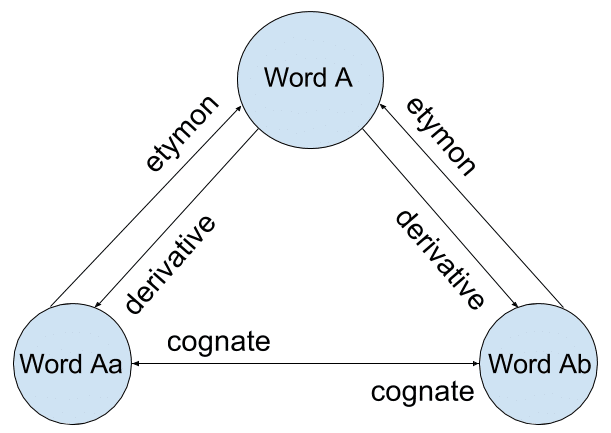 Etymology involves studying the origins of words as well as their original meanings.

Let’s analyze the word “etymology” itself to show exactly how this process might work.

The root words, or basic components, of the word etymology are the Greek words “étumon” (ἔτυμον), which means “true sense, original meaning,” and the word “logía” (λογία), which means “branch of study.”

In Chinese, the word for etymology (字源 zìyuán) also clearly betrays its meaning. The character 字 means “word” and the character 源 means “source” or “origin.” 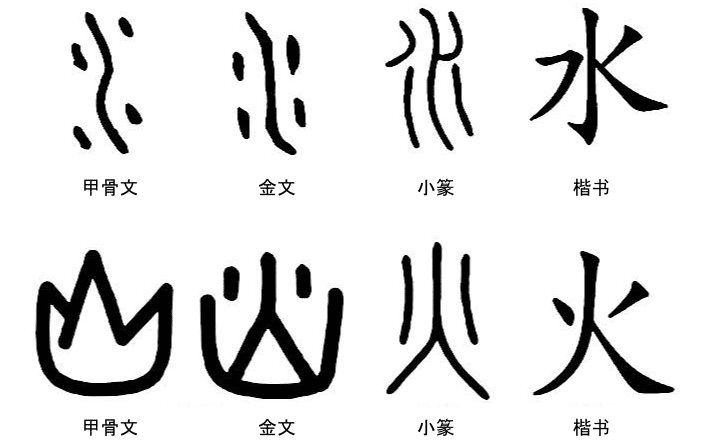 The development of Chinese characters can be studied by examining how their forms have changed over time. In the above diagram, we can see the evolution of the characters for water (水 shuǐ) and fire (火 huǒ).

Bits and pieces: orthography and phonology

By tracking down the original meanings of the different parts of a word, it’s possible to gain a nuanced understanding of its current meaning. Because of the English language’s unique history of extensive borrowing from other languages, understanding the etymology of an English word often involves delving into its French, Latin, or German root words.

This expansive habit of borrowing can make for some surprising origins in the case of many English words.

One important focus of etymology is concerned with understanding a given word’s development by tracing the history of its changing spellings and its changing sounds. In case you were wondering, the spelling part of a word is called orthography, arrived at by combining “orthos” (correct) and “graphia” (writing), while the sound part is called phonology, a word that comes from combining “phono” (sound) and “logy” (branch of study).

Etymologists also frequently try to track the development of the meanings of words over time. Analyzing this sort of semantic “sense development” requires a certain amount of guesswork and is thus seen as more difficult than tracking formal changes in spelling and sound. 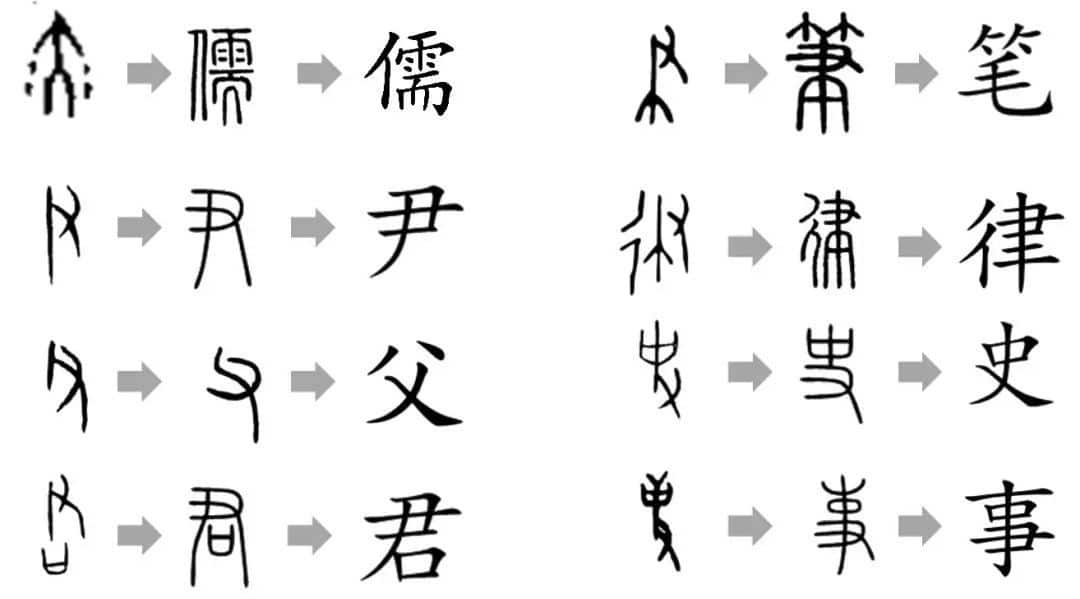 The form and meaning of many Chinese characters has remained surprisingly consistent through the ages.

Since Chinese doesn’t employ an alphabet in the way English does, Chinese etymology is different from English etymology.

In Chinese, the process is different, mostly because tracking changes in pronunciation in Chinese is much less straightforward since Chinese is not a phonetic language. 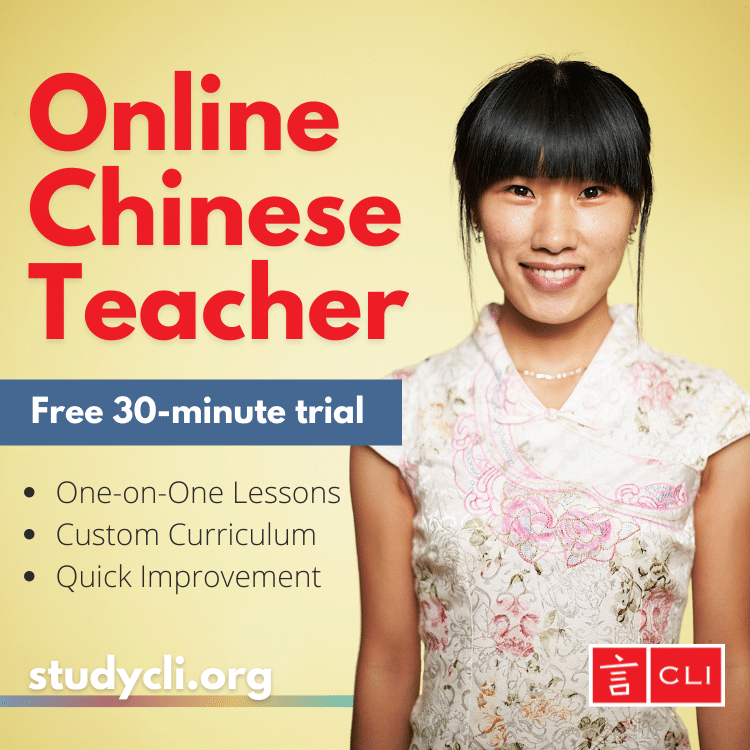 Unfortunately, knowing how a certain character was written 3,000 years ago as part of an oracle-bone inscription (甲骨文 jiǎgǔwén) does not necessarily illuminate how it was (or is!) pronounced. It may, however, reveal something about how the word’s meaning developed over time. Therefore, Chinese etymology mostly focuses on tracking the evolution of characters’ meanings and forms over time.

That being said, there are some useful techniques for discovering phonological changes in Chinese throughout history. One of these techniques is to consult ancient rhyming poems.

By simply observing which characters once rhymed and by studying how these age-old rhyme schemes differ from contemporary ones, one can find out a lot about how the pronunciation of a character evolved over time. However, Chinese phonological development is generally considered a separate field and is not considered a major part of Chinese etymology.

Chinese characters have gone through many different stages of development, including the small seal script (小篆 xiǎozhuàn), shown here.

A brief history of Chinese etymology

Despite the existence of certain limitations due to the fact that Chinese is not a phonetic language, Chinese scholarly interest in the etymological roots of words is a venerable tradition

Already in the era of the Eastern Han dynasty (25–220 CE), the renowned Xu Shen penned a masterful etymological treatise called Shuowen Jiezi (说文解字 Shuōwén Jiězì). This text, with a title that quite literally means "discussing writing and explaining characters,” has stood the test of time and is still considered an indispensable part of any literate Chinese person’s reading list.

Containing the definitions for more than 9,000 characters, Xu Shen’s work represents one of the first systematic attempts to examine Chinese characters on an etymological basis, prioritizing their origins and first appearances. 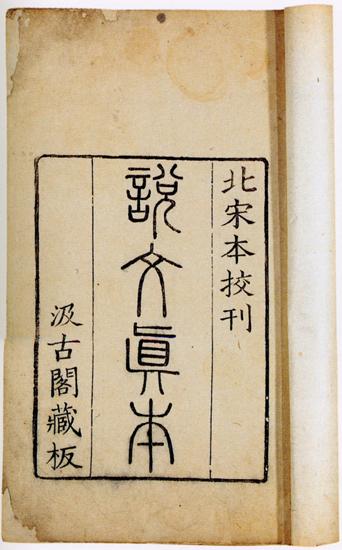 Shuowen Jiezi was an important early work of Chinese etymology.

The rectification of names

For Xu Shen and the Confucian scholars that inhabited his academic milieu, these etymological adventures were not just some academic wild goose chase motivated by idle curiosity. On the contrary, they were part and parcel of statecraft and even an expression of religious devotion.

This intensity was due to the fact that much of the Confucian philosophy of the time was guided by a belief in the “Rectification of Names” or Zhèngmíng (正名).

The word 正名 pairs the character for correct/proper/right (正) with the word for name (名). Cosmic order was premised on the idea that everything and everyone had their ordained role to play. If people or objects were given the wrong names, chaos might ensue! 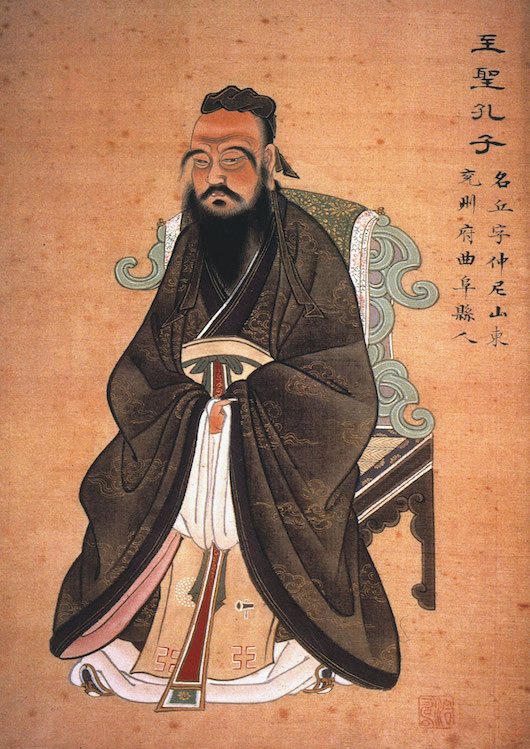 Confucius believed that words should correspond with reality.

This hope for “rectification” reflected a faith in the vital importance of assigning the true names to people, things, relationships, and ideas.

If properly executed, it was believed that the “Rectification of Names” would result in utopian social harmony. With people, places, duties, and relationships rightly named and accurately defined, the smooth functioning of the state and cosmic equilibrium was a cheerful inevitability.

With this Confucian commitment to “Rectification” in mind, it becomes easier to see why an emphasis on etymology was an important part of traditional Chinese scholarship.

According to Confucius, calling things by their proper names (正名 zhèngmíng) could help avoid social disorder.

The nuts and bolts of Chinese

In making your first forays into Chinese etymology, it will be helpful to have some grasp of the general component parts of the characters themselves.

In total, there are six ways to categorize Chinese characters. These are known as the 六书 (liùshū).

Chinese characters are categorized according to their origins, so just knowing which of the six categories a character falls into can tell you something about the course of its development. An exhaustive exploration of this subject merits a whole article by itself (and luckily for you such an article on the types of Chinese characters exists!).

For the time being, here are three basic distinctions that will help you tackle written Chinese in general and Chinese etymology in particular:

Much as the name “pictograph” indicates, characters that fall into the 象形字 (xiàngxíngzì) category are visual representations of the objects they represent. New students of Mandarin often learn these characters first because their iconic nature makes them easy to remember. 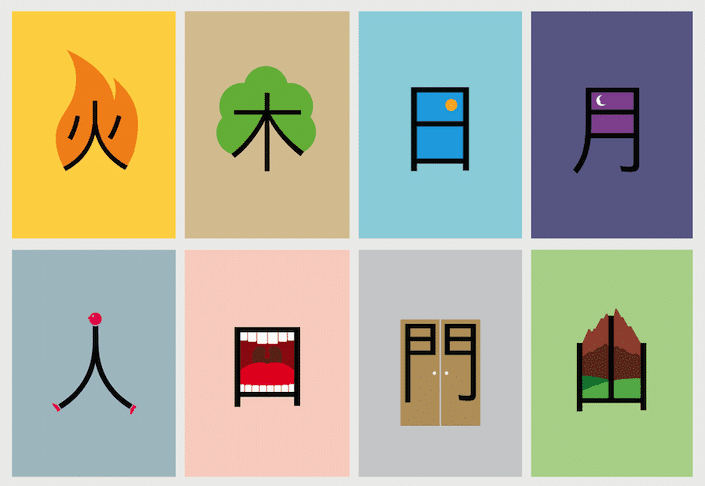 As this graphic by Chineasy makes clear, thinking about the objects that pictographic characters represent makes them easier to learn.

The fact that these characters look like what they represent can often serve as a shortcut to understand their meanings. Unfortunately, however, they comprise only 4% of Chinese characters.

Conveniently, these two parts that make up a character are also usually in the same place, although alas, as with most things in Chinese, there are numerous exceptions.

The classic example of this is 妈妈 (māmā) or mom.

On the left semantic side, there’s the radical 女 (nü), meaning woman, and on the right there’s the phonetic component 马, which we know is pronounced “mǎ.”

Thus, we know that the meaning of the word 妈妈 probably has something to do with a woman due to the radical on the left semantic side and is probably pronounced “ma” due to the presence of the 马 phonetic component on the right. 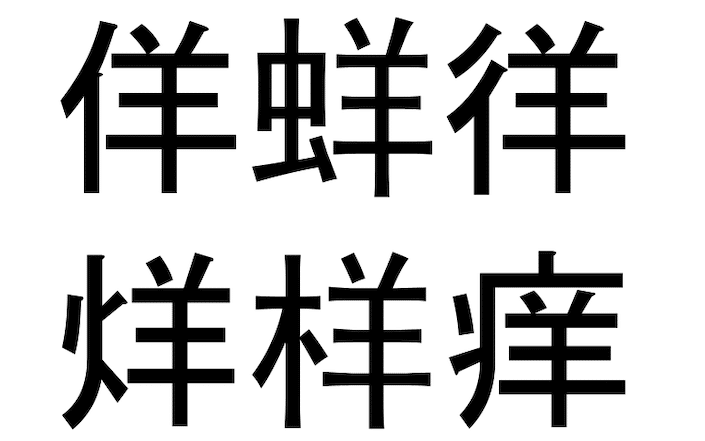 In each of these characters, the phonetic component “yang” can be found on the right.

Chinese characters that fall into the ideogram category are much like pictographs but are used to represent more abstract concepts and objects.

A great example of these are the Chinese representation of the first three numbers:

Their meaning is clearly and explicitly represented in the characters, which consist of different numbers of horizontal lines. 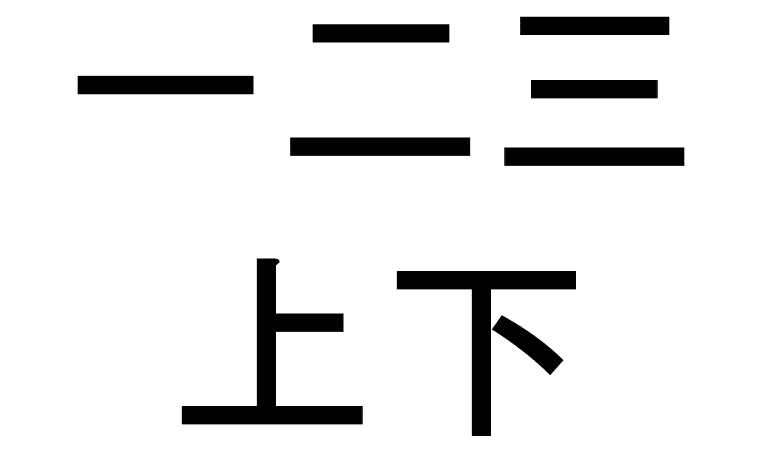 The meanings of characters in the simple ideogram category are generally quite self-explanatory.

To understand the etymology of this character, it is possible to track its development from its origins as an oracle bone character all the way to the present day.

In the original attempt to depict water, the creator of the character 水 (shuǐ) was presented with a challenge: how to create an image for water that would be widely understood in his or her culture and context?

Well, where is water to be found? In the river. Thus, the original character for water resembled a picture of a flowing river. 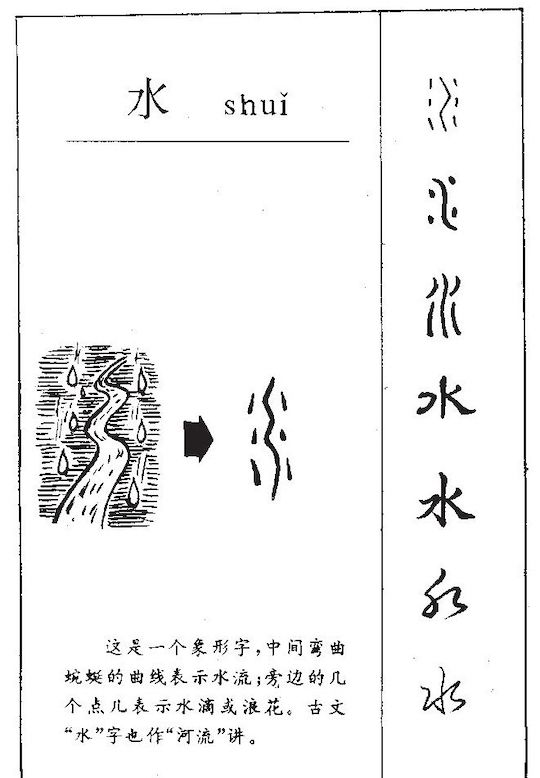 The Chinese character for water used to look much more like a flowing river than it does today.

Over time, as written Chinese meandered along the ways and byways of the Middle Kingdom’s 5,000-plus years of history, the original visual inspiration which inspired ancient Chinese people to use a picture of a river to represent water was diluted and abstracted. In modern times, the character bears only limited resemblance to its original form.

As an educational tool, knowing the story of this character’s origin might very well prevent you from forgetting it in the future.

For a live action visual trek through the evolutionary history of the water character, check out this YouTube video.

Richard Sears, known in the Chinese media as “Uncle Hanzi,” or 汉字叔叔 (Hànzì Shūshū), is a well known American living in China who has made a name for himself as something of an expert when it comes to the etymological origins of Chinese characters.

Back in the 1970s, Richard was a 22-year-old Tennessean living in Taipei, desperate to find a way to master the rigors of the Chinese language.

After some exploration, he found that studying Chinese etymology both interested him and helped him to remember the meanings of characters.

By engaging directly with the histories of the characters themselves, rather than simply trying to rote-memorize them in huge batches, he found that he was learning at an accelerated pace. After trawling through a couple of university libraries he was, however, aghast at the lack of etymological resources at his disposal.

This dearth of resources would be what launched Richard on his 50-year quest to document, explore, and make accessible the etymologies of Chinese characters.

Now into the 50th year of this life’s work, Richard has launched a sleek website. Using what he calls “computerized etymology” he hopes to make Chinese etymology available to all. This digital archive is a veritable treasure trove of definitions that help to peel away the historical layers of many Chinese characters.

For a fun jaunt through the historical twists and turns of various characters, try out the “random character” function on the homepage of the website and see where it leads you. 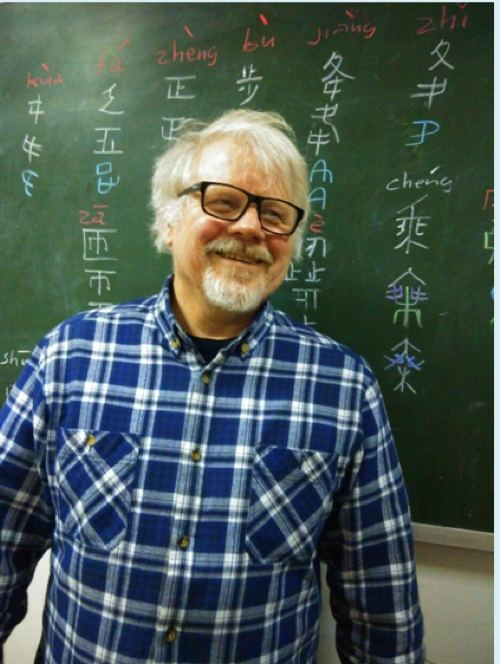 Richard Sears has spent many years studying the origins and evolution of Chinese characters.

A bridge into China

Due to its deep connections with Chinese politics, philosophy, religion and history, Chinese etymology provides a bridge into both traditional and contemporary Chinese culture. 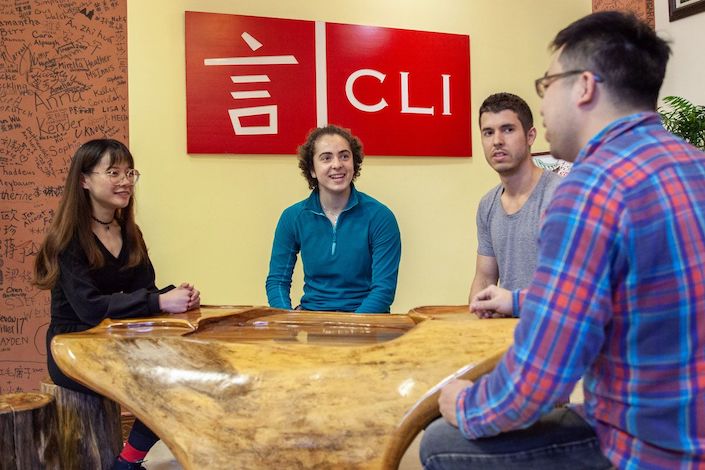 Learning about Chinese etymology can provide fascinating insights into the language and culture of China.

The Anatomy of Chinese Characters
1 2 Next »