How Do You Say “No” in Chinese?

If you’re new to Mandarin, chances are you want to learn some basic Chinese words and phrases. After “hello” and “my name is,” learning to say “no” in Chinese should be near the top of your list. Read this article to discover 10 ways to refuse someone with style. When it comes to reading this article, just don't say no (🔈 不要 bùyào)! 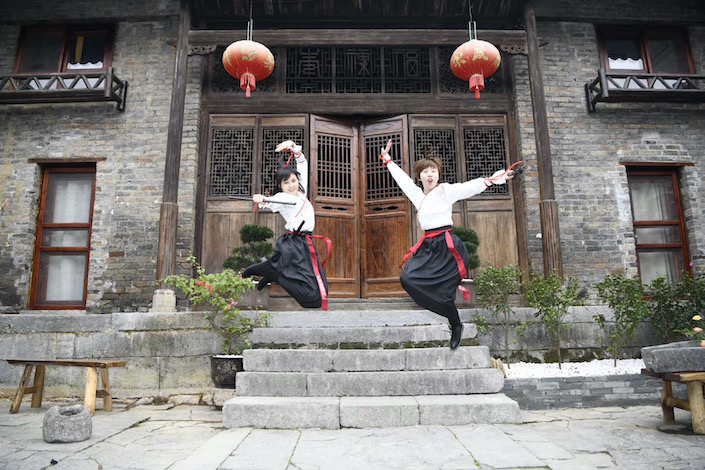 Saying “no” is an essential conversational skill. That’s especially true in China, where you’re likely to receive all sorts of offers (both well-meaning and not-so-well-meaning) to buy and do all sorts of things:

Want to teach English at the shady underground English training school down the street? (No.) Want to visit a nice Chinese teahouse on Nanjing Road? (No.) Want to buy this LV bag? I promise it’s authentic! (No.)

So how do you say “no” in Chinese? Unfortunately, there’s no direct Chinese translation for the simple English “no.” In general, the Chinese words or phrases needed to express negation vary depending on the situation.

Although this might sound intimidating, it’s helpful to remember that the ways we say “no” in English are also somewhat dependent on context. For example, we have various different words or phrases, like “no way,” “impossible” and even “nothing doing” which can be used in place of “no” when we want to refuse to do something. 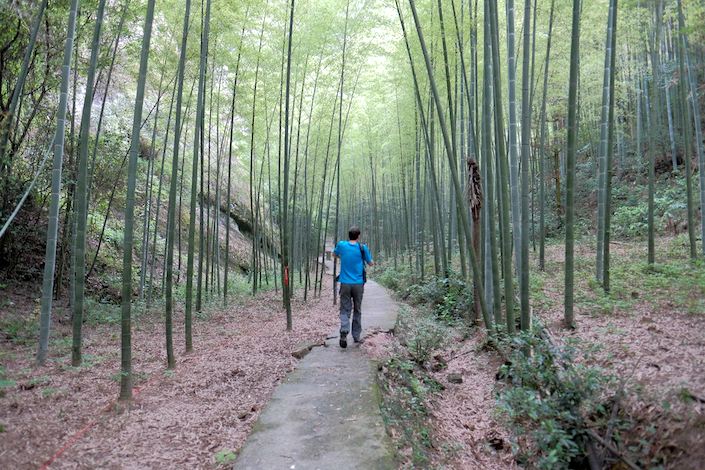 There's no direct translation for the English "no" in Chinese.

One of the most common ways to say “yes” in Chinese is 是 (shì, to be). Therefore, it should come as no surprise that negating 是 (shì) by adding 不 (bù, not; no) is one way to say “no” in Chinese.

When you say 不是 (bùshì), you are literally saying “not be.”

Usually, 不是 (bùshì) is used when disagreeing with or disputing the truth of something someone else has said. If someone asks you a question with the intention of confirming a fact, you can respond with 不是 (bùshì) to indicate that what they’ve said isn’t true.

不是的 (bùshìde) is another phrase that can be used to say “no” in Chinese. It sounds a bit more informal than 不是 (bùshì), but the two are used in almost the same way and are more or less interchangeable.

Note that the characters 不 (bù) and 是 (shì) by themselves are both pronounced using a 4th (falling) tone. However, when the tone of the character that follows 不 (bù) is also a fourth tone, then 不 will experience a tone change which will cause it to temporarily adopt the second (rising) tone. Therefore, even though the pinyin for 不是 is written bùshì, the phrase should actually be pronounced “búshì.” 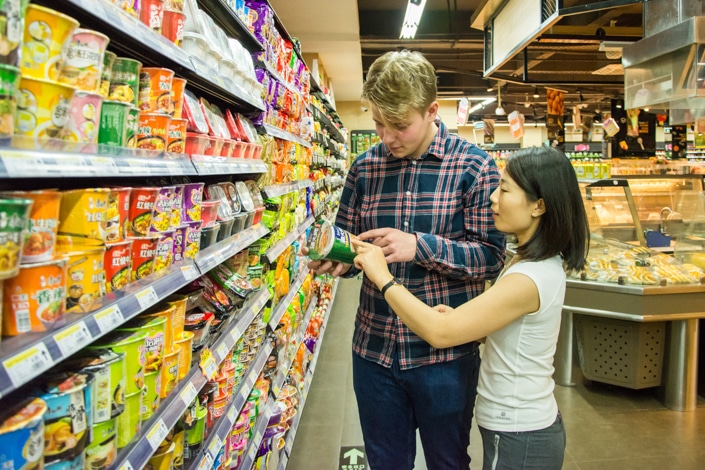 Learning to say “no” in Chinese is an essential skill that makes everyday life in China much easier.

If you search for the Chinese equivalent of the English word “no” in a popular Chinese dictionary like Pleco, chances are that the first entry you see will be 不 (bù). Although native speakers will understand that you mean “no” if you respond to every question with a simple 不 (bù), doing so will not make you sound very authentic.

It’s possible to respond to some questions using only 不 (bù), but native speakers don’t do so very often. Using only 不 (bù) to respond sounds quite abrupt and even angry. People are most likely to respond with a simple 不 (bù) when they are very unhappy with the person they’re speaking to and would prefer not to talk to them at all.

For example, imagine that person A in the following dialogue is a mother trying to make up with her teenage daughter (person B) with whom she’s just been fighting. The mother tries to make a nice suggestion that they go for a walk together but the daughter is still angry and responds abruptly, indicating that she isn’t ready to make up with her mom:

In Chinese, 对 (duì) means “right” or “correct.” Adding 不 (bù) in front of 对 (duì) allows you to say that something is “not right” or “incorrect.” In general, you can use 不对 (bùduì) when you don’t agree with someone’s opinion or with a statement that they have made.

Note that since 对 (duì) is pronounced with a falling tone, the pronunciation of 不 (bù) changes to a rising tone when placed in front of 对 (duì). Thus, even though the official pinyin is still written as bùduì, you should pronounce it as “búduì.” 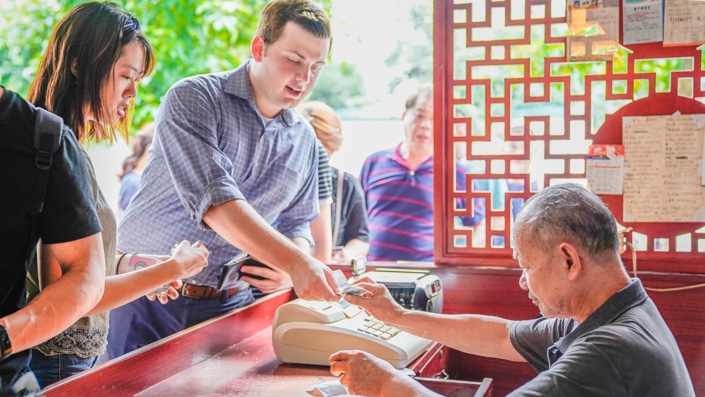 In China, everyday interactions provide a host of opportunities to practice the art of saying “no.”

不行 (bùxíng) can be roughly translated as “not OK” or “not all right.”

Unlike 对 (duì) and 不 (bù), which are pronounced with falling tones, 行 (xíng) is pronounced with a rising tone. Therefore, the pronunciation of 不 (bù) does not change when the two are paired together.

不可以 (bù kěyǐ) is another phrase that can be used to say “no” in Chinese. It consists of 可以 (kěyǐ), which can be translated as “can” or “may,” and the negative character 不 (bù).

Taken together, the phrase 不可以 (bù kěyǐ) can be literally translated as “not can” or “not may.” It’s used in essentially the same way as the English “may not” or “can’t” when responding negatively to a request or question. 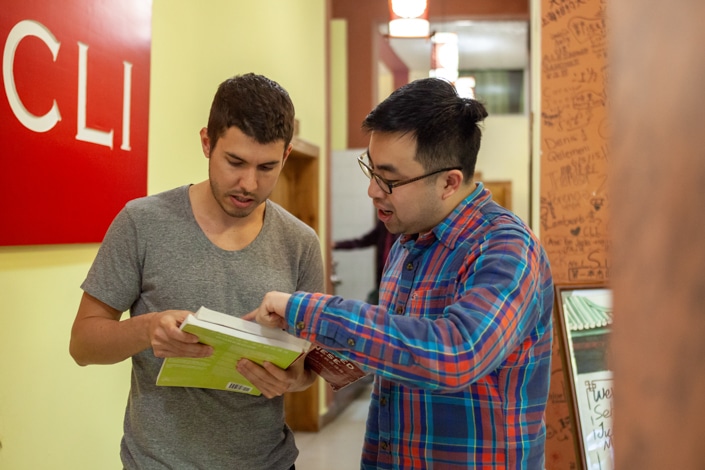 不可以 is a good way to express the fact that something isn’t allowed.

Want a stronger negative answer? Look no further than 不可能 (bù kěnéng). This phrase consists of the negative character 不 (bù), followed by 可能 (kěnéng), which in Chinese means “maybe” or “possibly.” Add them together, and you get 不可能 (bù kěnéng), which means “not possible,” “impossible” or “no way.”

Use 不可能 (bù kěnéng) when you want to let someone know that whatever they have said is completely out of the question or completely impossible.

Note that the meaning of 不可能 (bù kěnéng) can change depending on the context in which it is used. When used to respond negatively to a request, 不可能 (bù kěnéng) sounds quite harsh and severe.

Responding to a request with 不可能 (bù kěnéng) indicates that you are not only refusing the request, but are also unhappy that the request was made and consider the request inappropriate.

If you are looking for a polite way to say “no” to someone’s offer, 不用 (bùyòng) is the phrase for you. Although 不用 (bùyòng) also contains 不 (bù), its meaning is hard to guess using its component parts.

用 (yòng) in Chinese means “to use,” so 不用 (bùyòng) could be translated literally as “not use” or “no use.” However, this literal translation doesn’t shed much light on its actual meaning, which is “no thanks.” In general, 不用 (bùyòng) is used to indicate polite refusal.

In most cases where 不用 (bùyòng) is used, it can also be repeated, as in 不用，不用 (bùyòng, bùyòng). Repeating the phrase twice makes your response sound milder and more indirect than it would if you only used a single 不用 (bùyòng).

Note that since 用 (yòng) is pronounced with a falling tone, the phrase 不用 (bùyòng) is actually pronounced “búyòng.” 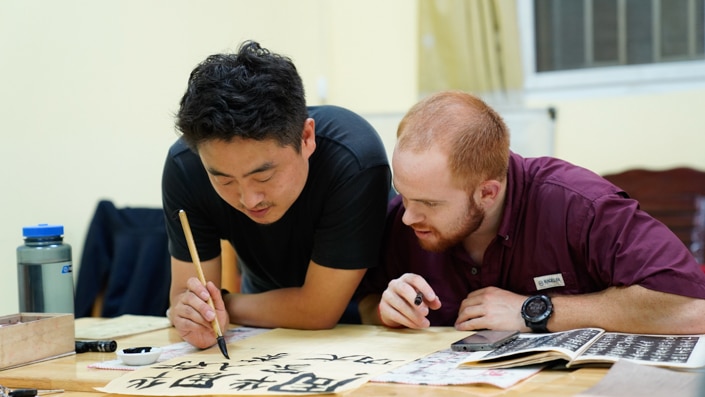 不用 is a good way to refuse someone’s offer of help with finesse.

If we break 没有 (méiyǒu) into its component parts, we get 没 (méi), which means “not” and (yǒu), which is a verb meaning “to have.” Thus, the literal translation of 没有 (méiyǒu) is “not have.” Unsurprisingly, one of the ways 没有 (méiyǒu) is used is to tell someone that you don’t have something.

In addition to being used to talk about what you don’t have, you can also use 没有 (méiyǒu) to talk about things that haven’t happened yet or that you haven’t done yet. 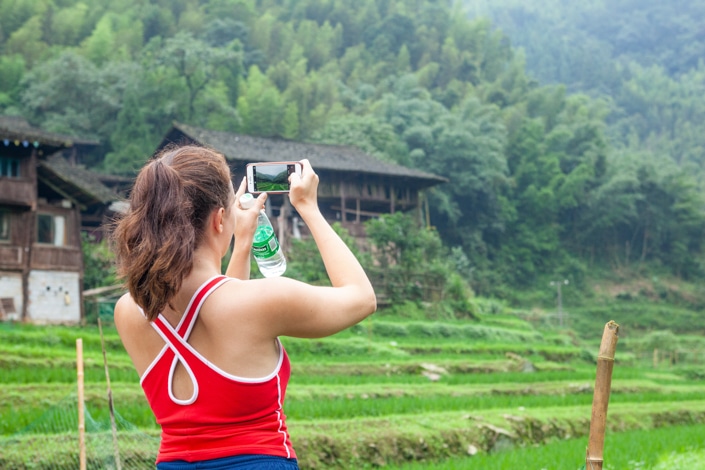 没有 is a commonly used way to say “no, I haven’t” in Chinese.

If you want to refuse someone’s request in a polite way, consider using 不好意思 (bùhǎoyìsi) or 抱歉 (bàoqiàn). Both of these phrases mean “sorry.”

To use these phrases correctly, be sure to pair them with the reason why you can’t do whatever was requested.

抱歉 (bàoqiàn) sounds somewhat more direct and formal than 不好意思 (bùhǎoyìsi) and is more likely to be used in more formal contexts like at work.

Perhaps the most common way to say “no” in Chinese is to simply use 不 (bù) to negate the most important verb or adjective in the question that you’ve been asked.

Note that using this method usually requires you to have some existing basic Chinese vocabulary so that you can identify the key words in the question and respond appropriately.

Check out the examples below to see how this method works with some common Chinese verbs and adjectives that you’re likely to encounter:

Learning to say “no” is an important skill that every beginning Chinese student needs to master.

Since refusing someone’s suggestion or request can easily cause offense, it’s especially important that you master the nuanced differences between each of the different ways to say “no” in Chinese that we’ve presented here. Doing so will help you avoid unintentionally hurting anyone’s feelings.

One of the best ways to really get a feel for which words work best in which contexts is full immersion in a Chinese speaking environment.

However, if it isn’t possible for you to travel to China now, consider creating your own online language immersion environment by watching TV shows in Chinese. Finding native Chinese speakers to communicate with online is also a great way to hone your understanding of how language use varies according to context.

If you’ve had enough when it comes to learning how to refuse requests, why not check out our article on how to say “yes” in Chinese? 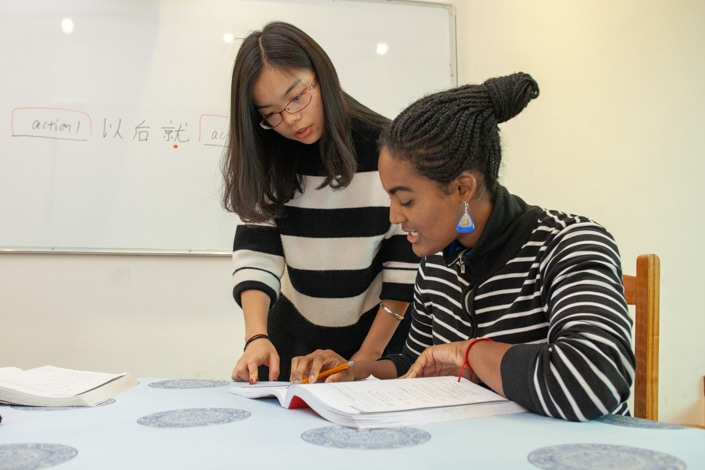 Mastering the different ways to say “no” in Chinese is a great way to make your Chinese sound authentic.

Essential Vocabulary for Saying No in Chinese