12 Chinese Proverbs and Idioms About Family

In this article, we'll first explore Chinese attitudes towards the family. Then, we'll examine 12 Chinese proverbs and idioms about family and consider how they reflect traditional cultural attitudes. 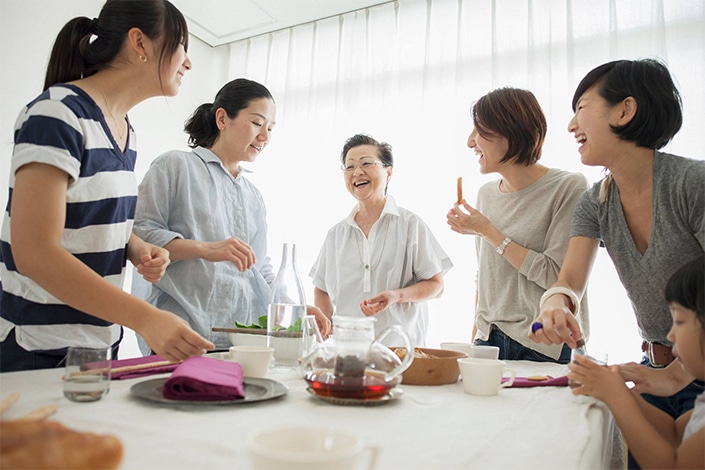 Proverbs and idioms: A cross-cultural phenomenon

Proverbs and idioms reflect society’s values. Each civilization encodes its collective wisdom and prejudices into figures of speech, stories and easily remembered phrases.

Familiar English-language proverbs and idiomatic phrases touch on everything from health and hygiene (“An apple a day keeps the doctor away”) to psychology (“Great minds think alike”) and morality (“Turn the other cheek”).

China’s millenia-old civilization has also produced a wealth of proverbs and sayings. Family is a central pillar of Chinese culture, so it should come as no surprise that many Chinese proverbs and idioms revolve around this important subject. 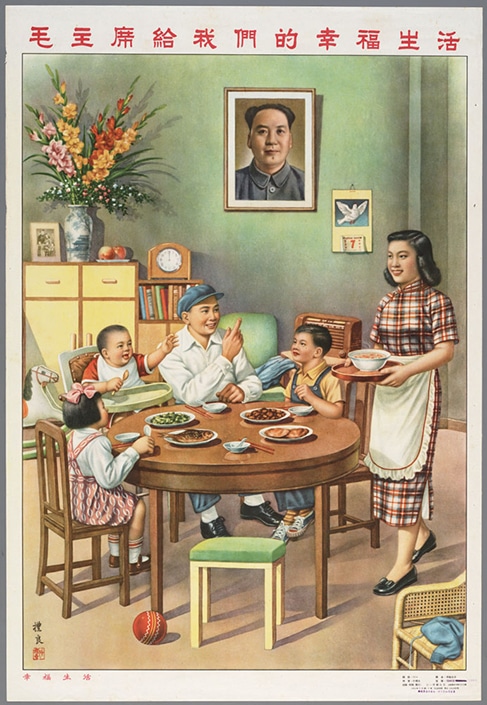 Family is the central pillar of Chinese culture, both ancient and modern.

Traditional conceptions of the Chinese family

Confucius (孔子 Kǒngzǐ) is a thinker whose ideas are essential to understanding the ongoing importance of the family in Chinese society. Indeed, Confucian principles governing how each person is bound by obligations to others are at the heart of the Chinese worldview. 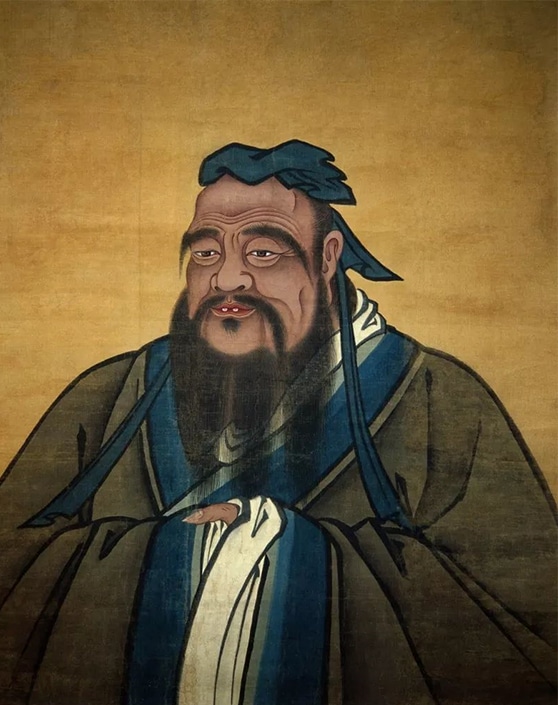 Filial piety and the Confucian hierarchy

The Confucian hierarchy emphasizes the importance of families harmoniously ruled by benevolent elder patriarchs. Such families traditionally served as the basis for every other social and political relationship.

In fact, people judged every aspect of the world, or 天下 (tiānxià), by whether it conformed to or violated these familial principles. Members of ancient Chinese society also used Confucian principles to decide what was right or wrong, virtuous or immoral, just or unjust, beautiful or ugly, and brave or cowardly. 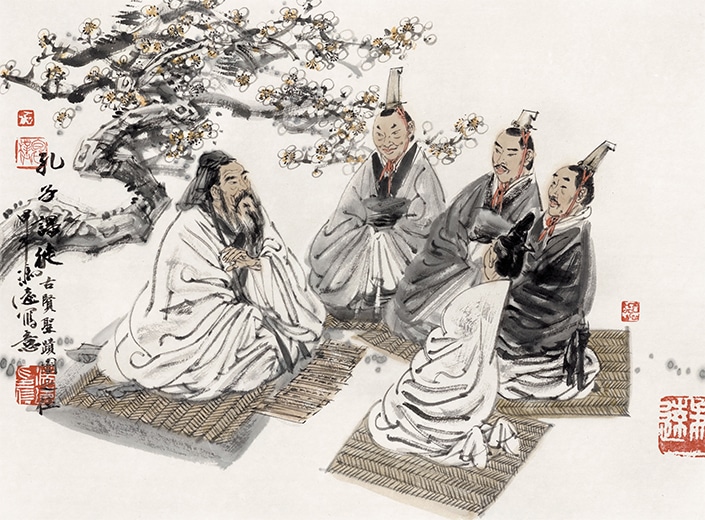 The teachings of Confucius had a wide-ranging impact on almost every aspect of ancient Chinese society.

For thousands of years, two key factors fostered extremely close family bonds. One was the Chinese collective household system, which integrated different married couples into the same family. The other was the custom of multiple generations living under the same roof. Because of this practice, cousins grew up together as siblings. Indeed, people considered children primarily as members of the same age-group or generation rather than as offspring of particular parents. 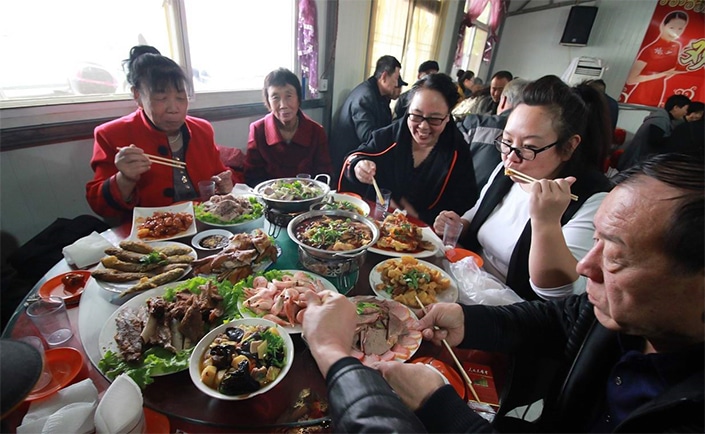 The children of these households learned to navigate and explore the world under the watchful eye of many older family members. The heavy demands of rural agricultural-based economic life further pressed these extended families into tight cooperative units.

Chinese culture places strong emphasis on the family and on reverence for ancestors. This is demonstrated by the many ways one can express one’s relationship with one’s relatives, both living and dead.

A lineage organization is a group of descendants who have collectively organized for the purposes of recording their genealogy and ritually worshipping or commemorating their ancestors. The size and scope of lineage organizations varies enormously and often depends on the wealth and prestige of individual members. 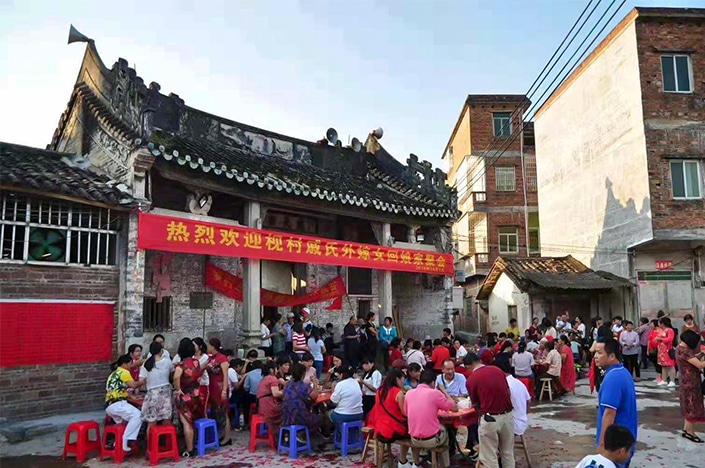 Wealthy lineages sometimes collectively own an ancestral hall or shrine. There, descendants can come to worship ancestors and consult spirit tablets. Some well-endowed lineage organizations award scholarships and engage in charitable work. Some even act as emergency banks where members can gain access to loans during times of financial instability. 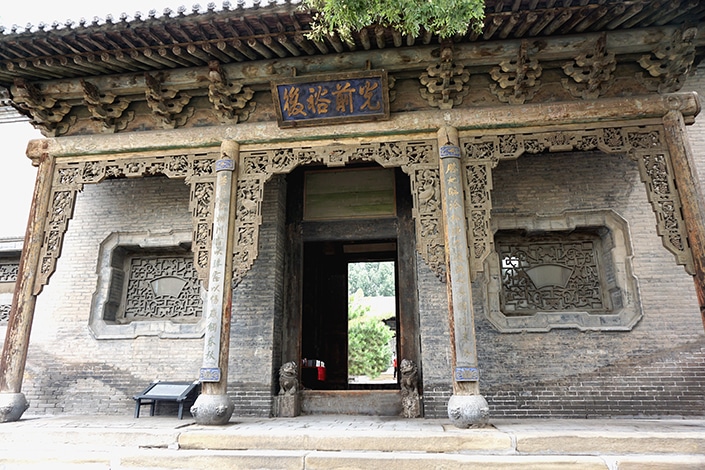 Ancestral halls are a common sight throughout rural China.

Some poorer lineage organizations simply have a place, sometimes in a designated room of an ancestral home, to honor the ancestors on important holidays (such as Tomb-Sweeping Day or Ghost Festival). Ceremonies to honor the ancestors usually involve making symbolic food offerings, burning joss paper and lighting fragrant incense. 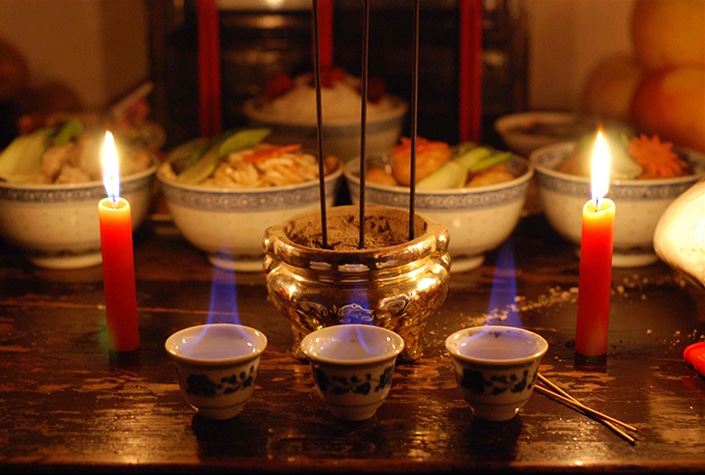 Descendants frequently leave offerings of food for their ancestors.

A descent line consists of all the fathers and sons in one’s family tree. It goes back to the beginning of time, starting with the first father who founded the line. As long as one continues to produce male heirs, the descent line will continue indefinitely.

If one doesn't have a son, it's possible for a line to die out. Confucian society considered not bearing a male heir to be one of the worst things imaginable. This was because it also meant, in Chinese tradition, that no one could make sacrifices to ancestors or maintain the ancestral hall. 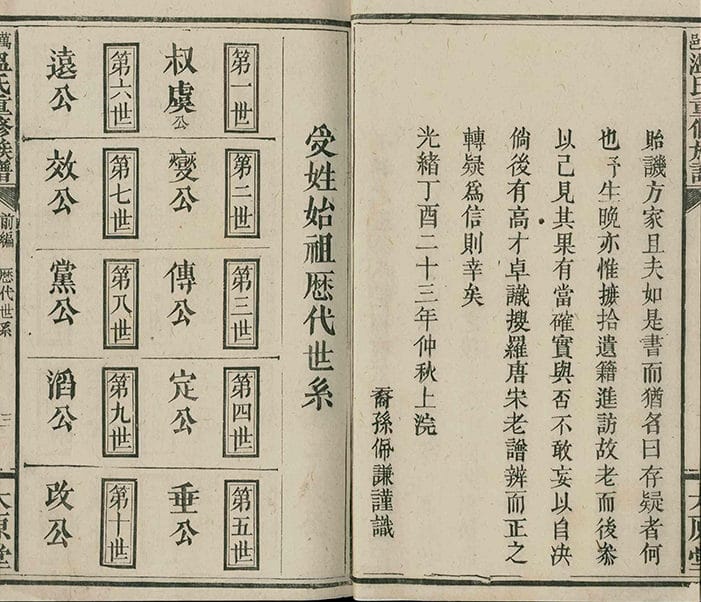 Traditionally, most Chinese families kept descent line records like this one.

Clan and same-surname associations either in China or overseas are broader and looser coalitions of individuals who share an ancestor. Members of these groups generally lack a clear understanding of the specifics of their collective descent relationship. In the absence of clear records, sharing the same last name is an important part of these groups.

These “same-surname associations” (同姓会 tóngxìnghuì) often served—and continue to serve—as sources of mutual-aid and mutual protection. Worship of the collective ancestor still occurs. However, the absence of reliable records like spirit tablets or other genealogies hinders the practice of many traditional rituals. 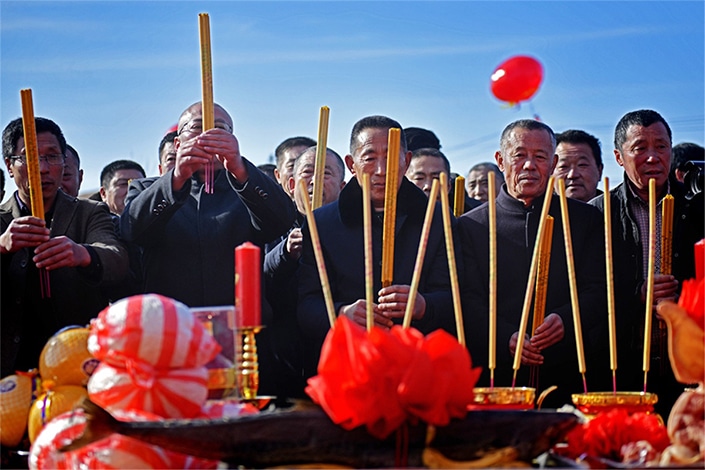 The importance of the family can also be detected through language. Consider, for example, the existence of many family-related Chinese words that contain the character 家 (jiā):

The Western nuclear family consists of one father and one mother raising their children. The traditional Chinese extended family, by contrast, consists of grandparents, unmarried aunts, uncles, married sons, grandchildren and great-grandchildren. This way of life produced an astoundingly rich vocabulary to define, differentiate and describe relations between family members. 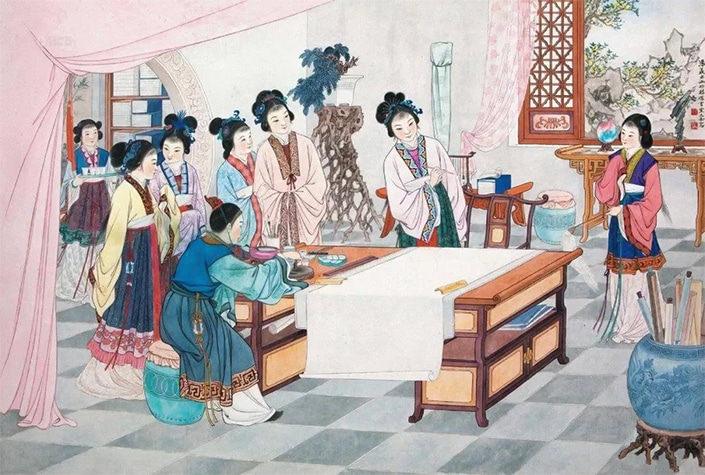 Due to the importance of family in traditional Chinese culture, there are many family-related words in Chinese.

The oldest known dictionary of the Chinese language, the Erh-ya (尔雅 Ěryǎ), contains a mind-boggling 2,000 terms for family relations. Due to the rapid contraction of the family as a consequence of the one-child policy (1979-2015), many of these words have fallen into disuse. However, contemporary Chinese still employs dozens of unique relationship words, many of which don’t exist in Western languages. For example:

As one might expect, the relationship between men and women in China has changed a lot over the years.

Men's traditional role in the family was that of provider, maintainer and protector. Historically, Confucian and Daoist customs, patriarchal cultural beliefs and the exclusion of women from economic and educational spheres all combined to elevate the importance of men and minimize the importance of women. This phenomenon is referred to as 重男轻女 zhòngnán-qīngnǚ in Chinese. 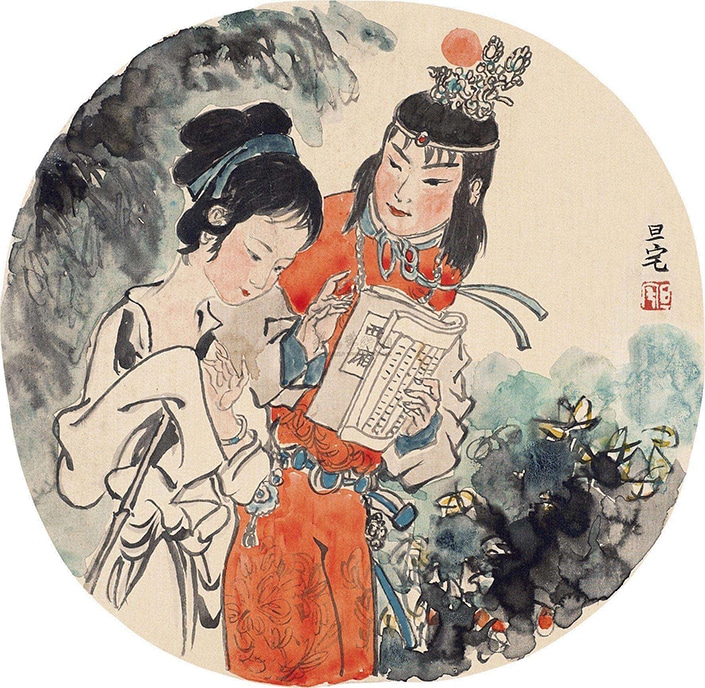 Throughout much of Chinese history, women were primarily seen in light of their ability to produce male heirs who would maintain the descent line, thereby pleasing the ancestors. In fact, the term for “good” in Chinese is 好 (hǎo), which is the character for female (女 nǚ) set alongside the character for a male child (子 zi).

This belief in women’s inferiority compared to men is the source of several sayings still in use today, such as 男尊女卑 (nánzūn-nǚbēi). Translated literally, this saying reads “men are high, women low.” It means “women are inferior to men.” 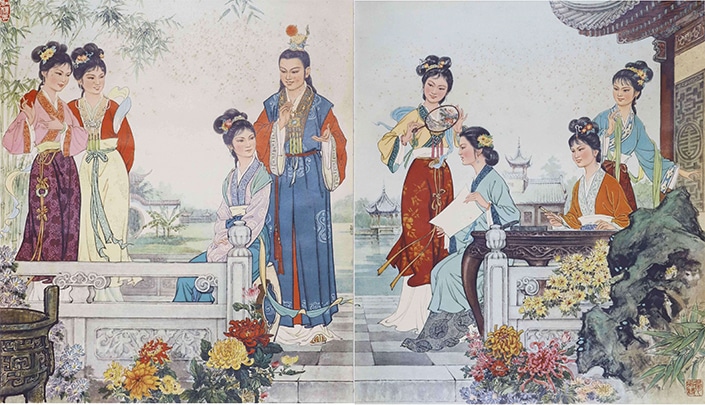 In traditional Confucian society, women had little autonomy outside the home. 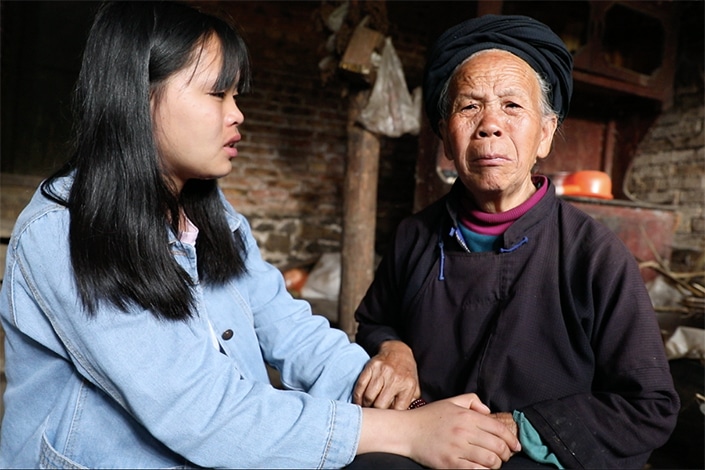 In all arenas and at all stages of life, Confucian society required women to allow their male counterparts—fathers, husbands and sons—to take on responsibility for most aspects of their lives. Despite these strict Confucian norms, in practice many women did in fact take up positions of power. One, Wu Zetian, even assumed the most powerful position in the land, becoming emperor in her own right. 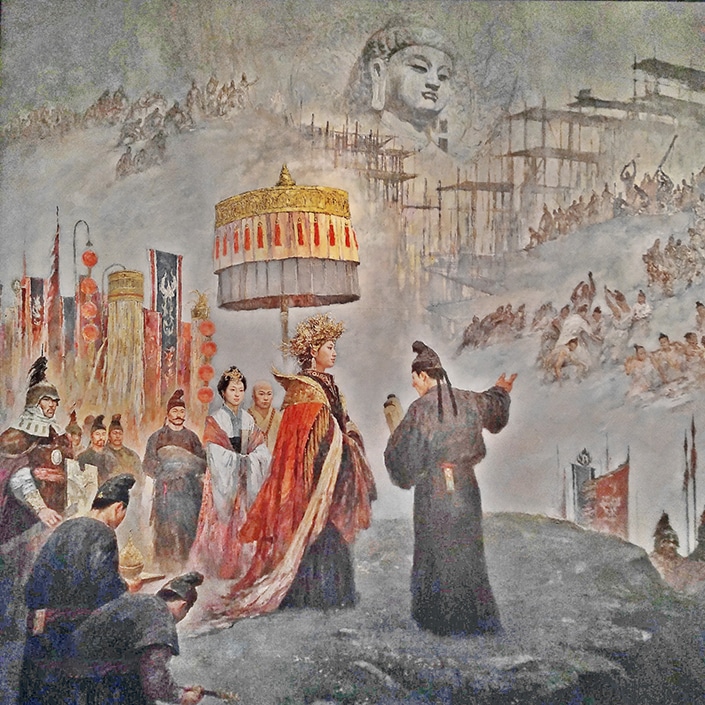 Emperor Wu Zetian was China's first and only female emperor.

China’s rollercoaster of a 20th century shattered many of these historical patterns and radically reshaped many others. While there are enormous differences between conditions in urban and rural areas, since 1949 Chinese women as a whole have become much more educated, independent and integrated into the workforce (although they're still substantially underrepresented when it comes to business and political leadership positions). 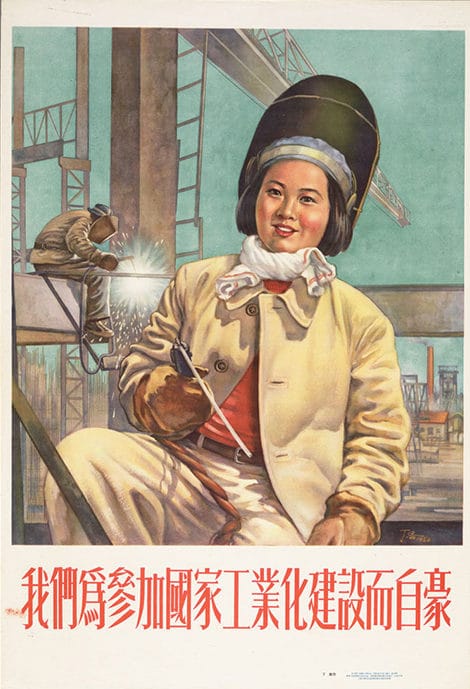 Communist propaganda posters encouraging women to take pride in helping China modernize through manual labor were once a common sight.

21st century Chinese society continues to change and transform. China’s megacities are fast producing their own updated expectations for men and women, while the influx of tens of millions of migrant workers from rural areas often reinforces older relationship models. 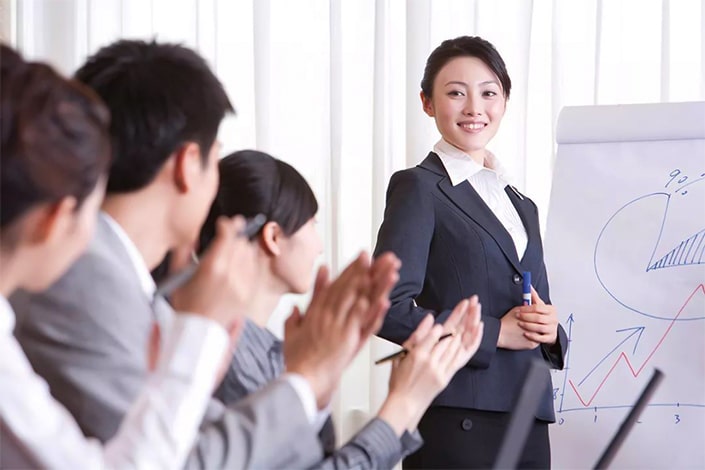 Modern Chinese women have made great strides in the workplace.

As is the case with all nations, but perhaps more so in China due to the length and continuity of its history, modernity and tradition have yet to achieve a stable balance—it remains a give and take between past and present. Women continue to assume unprecedented positions of power. At the same time, however, traditional beliefs continue to influence which options and opportunities are—and are not—available.

Chinese proverbs and idioms about family

The proverbs and idioms below reflect the historical centrality of the family to Chinese cultural life, and they also indicate just how multidimensional this notion is.

History is sometimes wonderful, sometimes terrible and always complicated, and Chinese history is no different. These proverbs and idioms record China’s evolving attitudes towards the family. 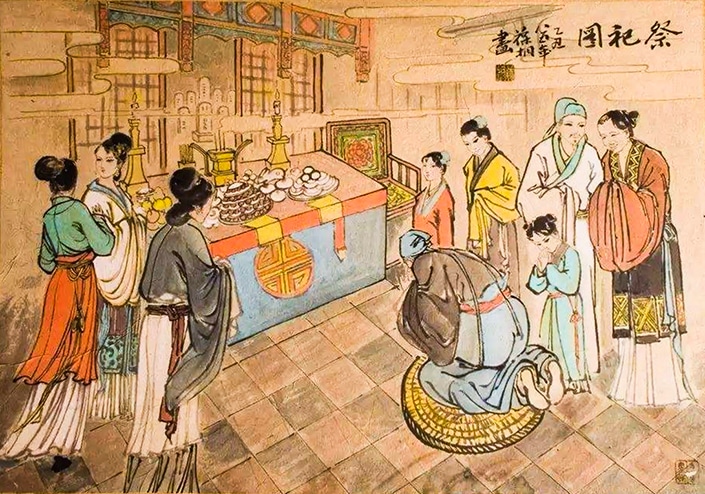 Paying respect to one's ancestors is an important part of Chinese culture.

A state cannot have two monarchs or a family two heads.

The predecessors plant the tree, the descendants cool off in the shade.

A tree can grow 10 thousand feet tall but its leaves will always fall back to the roots.

Note: This proverb was often used in situations where someone had been exiled or engaged in long years of travel. It was used to mean that even though a person might live for many years away from home, he or she would eventually return to his or her native soil.

If the father is a tiger, then the son will also be a tiger.

Note: This is a Chinese proverb that is equivalent to Western sayings such as “like father like son” or “the apple doesn't fall far from the tree.”

Note: This proverb is usually used by grandparents when playfully talking about their grandkid’s visits.

During difficult times, it's your family that supports you.

Chinese proverbs and idioms about family: property and secrets

Be thankful for a bad broom as if it were a thousand ounces of gold.

Note: This proverb suggests that even if something is of little value, if it's your property you should cherish it.

There's a skeleton in every house.

When you go out, observe the color of the sky, when you come in, observe the facial expressions (of your family members).

Note: This was proverbial advice given to newly married women.

Just as too much salt makes food taste bad, too many children make a mother’s life hard.

Note: This proverb, and the one that follows, demonstrate the playful and strategic approach that many Chinese women took to navigating their relative powerlessness when it came to marriage.

If the house is cold then marry a man, you'll have clothes to wear and rice to eat. 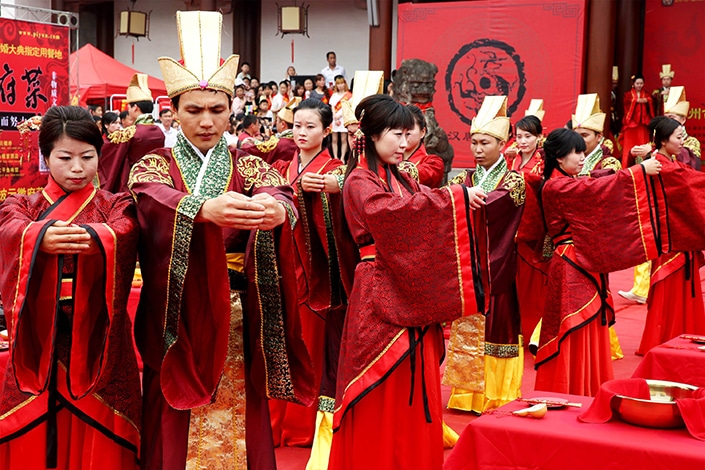 Want to learn even more about Chinese proverbs and the Chinese language? Find out how CLI’s program options can greatly enhance your understanding of Chinese language and culture, and check out this article on the Anatomy of Chinese Characters! We look forward to welcoming you to Guilin.