Knowing what to look for and how to order meals as a vegetarian in China is crucial for a deliciously smooth travel experience. Read on for CLI’s veggie-friendly guidebook, designed for your feasting pleasure!

Can I survive as a vegetarian in China?

Sticking to a vegetarian diet in China can either be challenging or straightforward depending on your expectations. Fortunately, vegetables (蔬菜 shūcài), grains (谷物 gǔwù) and beans (豆子 dòuzi) are staples of Chinese cuisine, so surviving as a vegetarian in China is certainly possible.

In many Chinese homes, dinner tables are filled with abundant and flavorful non-meat dishes, from stir-fried bitter melon to oven-roasted tofu. Luckily for vegetarians, one usually doesn’t need to look far to find scrumptious food in which meat isn’t the main ingredient. 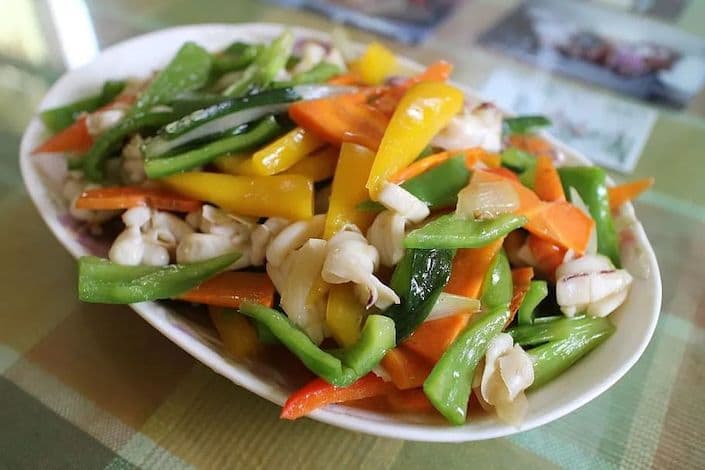 China offers a variety of vegetarian and vegan dishes for those willing to seek them out.

Beware: Chinese restaurant staff may have their own definition of "vegetarian"

Despite the prevalence of veggie-friendly cuisine, a common difficulty for vegetarians in China has to do with differing ideas about what it means to be “vegetarian.” It is typical for Chinese chefs, servers and members of the general public to refer to a dish as vegetarian even if it contains some meat ingredients.

For example, your waiter may insist that a tofu dish is vegetarian even when beef was used to season the sauce. Similarly, your friend’s aunt may call her pumpkin soup vegetarian, even when the broth was simmered with pork bone.

In order to be successful eating a meat-free diet in China, it’s important to first examine the context and customs surrounding vegetarianism.

That said, if you’re more interested in learning how to communicate your dietary preferences to your hosts, you can jump directly to our handy list of essential Chinese vocabulary and phrases for vegetarians. 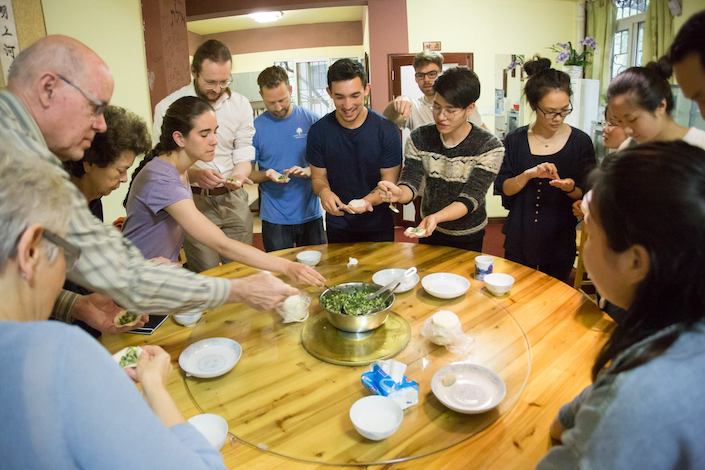 Learning about the context and customs surrounding vegetarianism in China can help you live meat-free.

How many vegetarians live in China?

Vegetarianism isn’t exactly widely practiced in China. It is estimated that about 4% of the population regularly follows a meat-free diet. As we’ll soon find out, the vast majority of China’s vegetarians choose to do so for religious reasons.

Going meat-free for health, environmental or animal rights purposes is still a somewhat new and mystifying concept to many regular people (老百姓 lǎobǎixìng) in modern China.

Meat as a status symbol

Throughout China’s dynastic history, ordinary families excluded from the noble class often lived without meat or animal products for lengthy periods of time.

If meat was inaccessible, the typical farmer’s diet would consist of vegetables and grains. Livestock were costly to raise so meat was generally only consumed during festivals and special occasions.

During the communist era, famines and state-sanctioned food rationing meant that meat remained a novelty for many families throughout much of the twentieth century. Thus, meat was be consumed once or twice per month at most and sometimes only once per year, during the Chinese Spring Festival.

For much of the twentieth century, many Chinese people only had the opportunity to eat meat during major festivals like the Chinese New Year.

When the country’s economy blossomed and manufacturing industries developed as a result of the new market reforms introduced in the 1980s, meat production also rapidly expanded. These days, Chinese consumers, who now purchase 28% of the world’s meat and half of all pork, generally have easy access to all kinds of poultry, fish, pork and beef, which was once considered a luxury ingredient and nicknamed the “millionaire’s meat.”

The scarcity of meat during certain periods of the Chinese collective past may contribute to the reluctant attitudes towards vegetarianism prevalent among many people in China today. 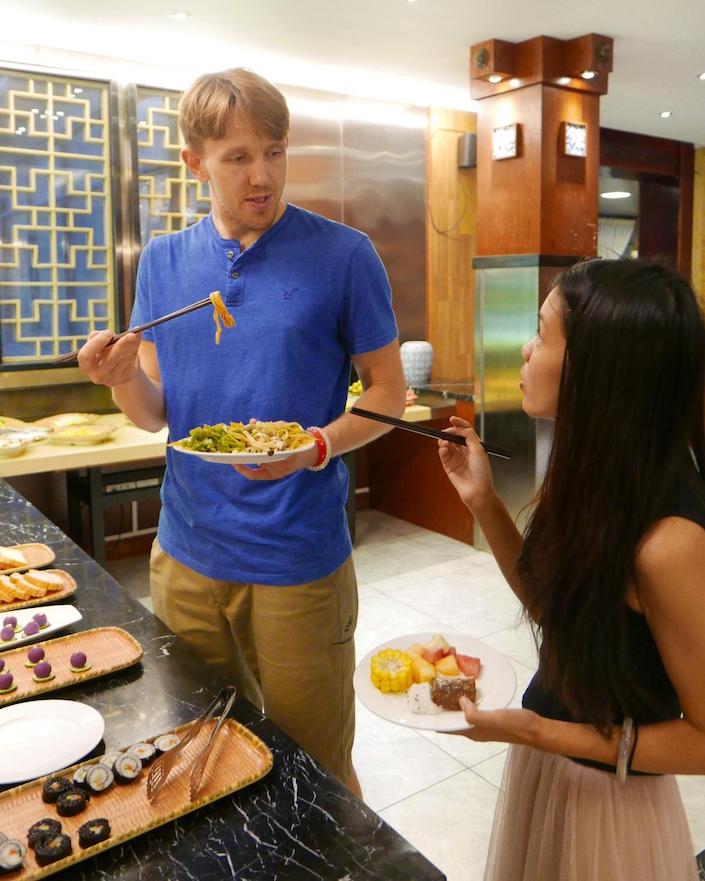 Meat is popular in modern China and some people remain reluctant to embrace vegetarianism.

History and culture of Chinese vegetarianism

To further understand modern Chinese dietary preferences, the history and culture surrounding vegetarianism in the Middle Kingdom is worth exploring further.

From the fires of temple kitchens

The historical origins of vegetarianism in China remain rather enigmatic. One of the earliest references to the diet can be found in court records from the brief Western Han dynasty (202-208 BCE), which recount that tofu was invented by the Daoist emperor at the time.

Another early reference can be found in the 齐民要术 (Qí Mín Yào Shù; “Essential Techniques for the Welfare of the People”), an epic catalogue of agrarian texts written by an official during the Northern Wei dynasty (533-544 CE) which lists several popular vegetarian recipes.

Since China was historically an epicenter of Buddhism and Taoism, it is widely accepted that these two religions, both based upon principles of compassion and harmony, influenced the nation’s earliest vegetarian trends. 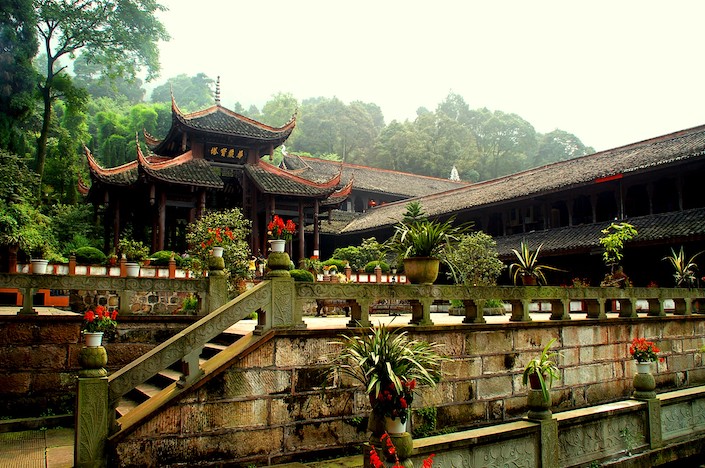 In China, vegetarianism has long been associated with Buddhism and Taoism.

In fact, many temples across the country today also double as vegetarian or even vegan restaurants and are open to the public for dining. If you’re unsure of where to find reliable vegetarian grub, consider heading to a local Buddhist temple for your next meal.

Interestingly, many Chinese people who typically consume meat choose to refrain from animal products on certain dates, including the first and fifteenth days of each lunar month, as well as the first day of the lunar new year, a custom rooted in Chinese Buddhism and related folk beliefs. 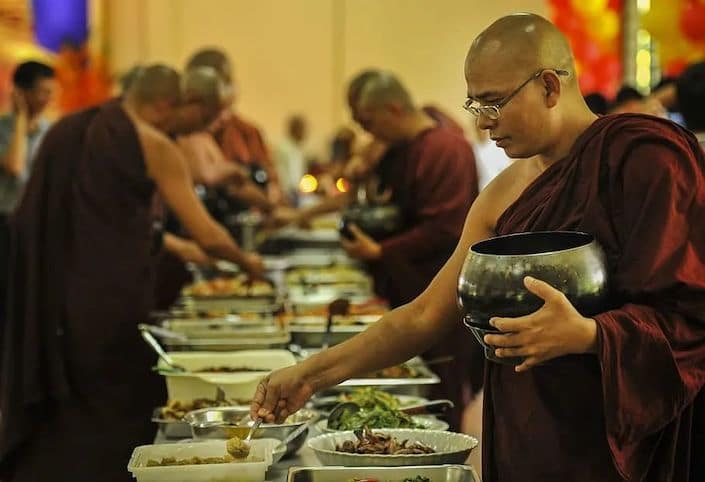 Today, Buddhist temples are great places to go if you want to enjoy a vegetarian meal.

Despite the relatively low number of full-fledged vegetarians in China, there is some evidence suggesting attitudes towards meat may slowly be shifting.

The demand for plant-based imitation meat products in China was estimated at around 790 million USD in 2018 and has been forecasted to grow by at least 20% annually, according to a study by the Good Food Institute. In Hong Kong, approximately a quarter of the population reported that they follow a flexitarian diet.

In 2016, the Chinese government announced a plan to cut meat consumption by 50% within the next fifteen years in order to reduce the nation’s carbon footprint and combat growing rates of obesity and diabetes.

In response to the demands of an increasingly health-conscious and eco-savvy generation, meatless and organic options are becoming more visible in eateries across China’s cosmopolitan urban centers.

More and more vegetarian and diet-friendly restaurants are opening their doors each year, and even some fast food chains in China’s first-tier cities have added imitation meat burgers and nuggets to their menus.

No matter where you go in China, you’re sure to have a more seamless experience if you know some Chinese terms and phrases geared towards vegetarians.

Once you’ve got the essentials down, keep in mind the below list of familiar, go-to vegetarian dishes to look out for when eating at restaurants:

Remember that because the concept of vegetarianism in China may differ from your own, it’s still best to be persistent with wait staff and chefs to ensure that animal products are not being used for your food orders. Try out the following phrases when ordering or purchasing food in China:

Note that the phrase 我是吃素的 (Wǒ shì chīsù de; I am vegetarian) is perhaps the most important one on the above list. Enterprising beginner students of the Chinese language unfamiliar with the character 素 (sù; a rarely-used word for vegetable) may be tempted to use the seemingly more straightforward phrase 我不吃肉 (Wǒ bù chī ròu; I don’t eat meat) instead. This strategy can backfire, however.

Just saying that you don’t eat meat can be ineffective because the Chinese word for meat, 肉 (ròu), is frequently used to mean “pork” instead of meat in general. This is perhaps because pork is the most commonly eaten meat in China. Often when there is meat in a dish, it tends to be pork.

When you say that you don’t eat 肉 (ròu) in China, your listener may assume that you just don’t eat pork, but that other meats, such as beef and chicken, are fine. This interpretation will make sense in your listener’s cultural context since China has a small but visible Muslim minority, most of whom do not consume pork.

Therefore, if you are vegetarian, make sure that you go the extra mile and learn the phrase 我是吃素的 (Wǒ shì chīsù de; I am vegetarian) before your trip. Your stomach will thank you!

Fortunately, there are plenty of useful tools to help you get by as a vegetarian abroad. Check out www.happycow.net for a database of vegetarian and vegan restaurants in China and around the world. The Vegan Passport is also a helpful app for explaining veganism to waitstaff worldwide (including China).

At the CLI Center, we welcome vegetarians, vegans and those with other dietary preferences to study Chinese and experience China with us in Guilin. Our home-cooked lunches always include several vegan options and our team is readily available to recommend veggie-friendly restaurants and dishes, and provide language tips during your program.

In fact, CLI’s very own co-founder Bradford Fried spent over a decade living as a vegan in Guilin and helping guide students from around the world during their meat-free travels. 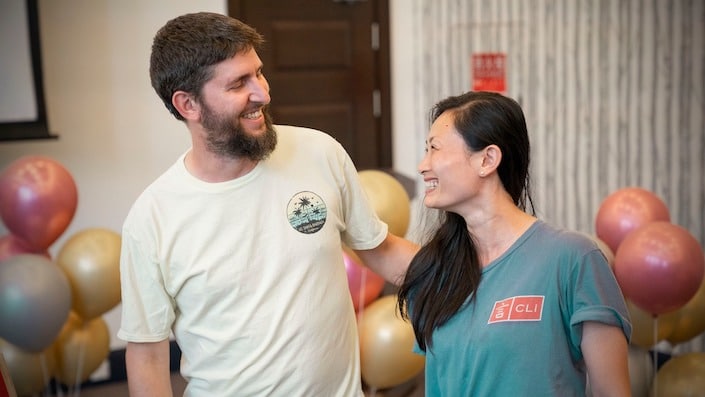 Being a vegetarian is a lifelong learning process. With each new country you visit or restaurant you dine in, new challenges and rewards await you in your commitment to eating meat-free. On behalf of CLI, we wish you health (健康 jiànkāng) and happiness (幸福 xìngfú) on your journey as a vegetarian in China!