The Lantern Festival (元宵节 or Yuánxiāojié in pinyin) is a Chinese holiday that traditionally marks the end of the Chinese New Year (Spring Festival) celebrations.

Chinese people celebrate this holiday by enjoying colored lantern displays and eating sweet rice balls called tangyuan. Read this article to learn about the history of the Lantern Festival and discover more about how it’s celebrated today.

The origins and history of the Lantern Festival

Lantern Festival celebrations began around 2,000 years ago during the Han Dynasty (202 BCE-220 CE). The holiday's exact origins are somewhat unclear.

Several different origin stories are used to explain where the festival came from. We’ve outlined two of the most important ones below.

China's Lantern Festival marks the final day of the 14-day Chinese Spring Festival. It is celebrated on the first full moon of the Chinese New Year.

Origin story one: A Buddhist celebration

One story about the origins of the Lantern Festival says the holiday was created during the time of Emperor Ming of Han (58-75 CE).

At this time, Buddhism was already gaining popularity in China.

Emperor Ming was a supporter of Buddhism and after he learned that it was customary for Buddhist monks to light lanterns on the 15th day of the first lunar month, he decreed that imperial palaces and individual households should do the same. This practice lives on as today’s Lantern Festival. 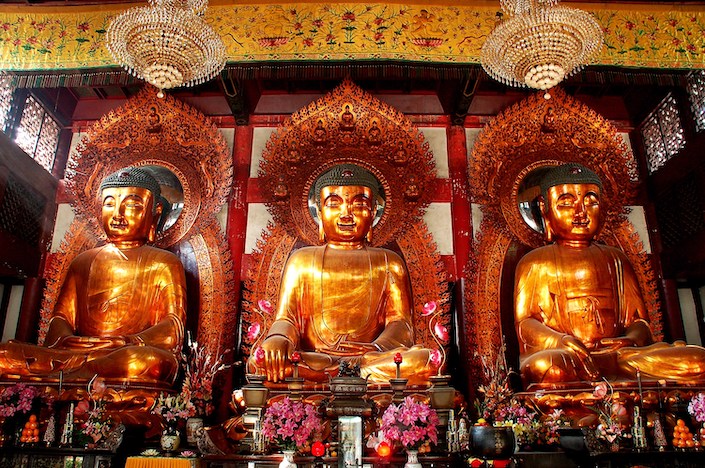 One Lantern Festival origin story claims that we can find the holiday's roots in early Chinese Buddhism.

Origin story two: A trick played on the Jade Emperor

Another story used to explain the origins of the Lantern Festival has to do with the Jade Emperor. Supposedly, his favorite crane was killed by some villagers, so he decided to take revenge by burning down their village on the 15th day of the first lunar month.

When his daughter heard about her father’s plan, she felt sorry for the hapless villagers and warned them about what was going to happen.

To save themselves, the villagers decided to trick the Jade Emperor into thinking their village was already on fire. They did this by hanging red lanterns, setting off firecrackers and lighting fires throughout the village.

Their plan worked. The Emperor was deceived and the village was saved. Afterwards, residents continued to light firecrackers and hang red lanterns every year to commemorate the event. 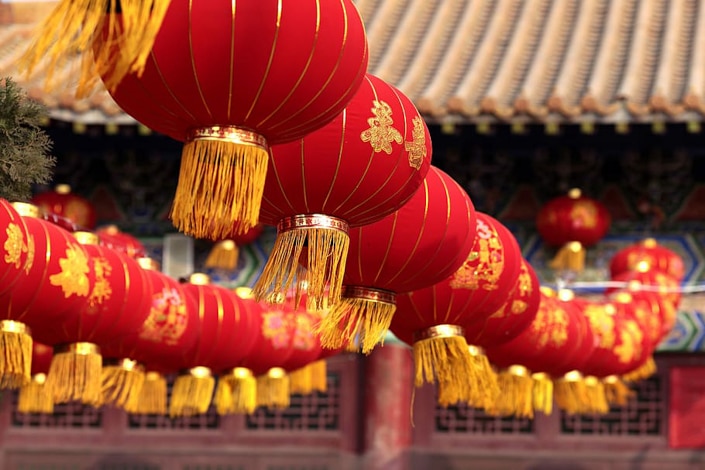 Some say the red lanterns used in today’s Lantern Festival celebrations are meant to represent the firecrackers, lanterns and fires used by ancient villagers to deceive the Jade Emperor.

The Lantern Festival through the ages

Whatever its origins, the Lantern Festival soon developed into a popular Chinese holiday. Thanks to Chinese cultural influence on other Asian countries, it didn’t take long for the festival to spread to neighboring nations like Korea and Japan.

The Lantern Festival has been celebrated with various degrees of pomp and circumstance over the years. In the Tang Dynasty (618-907 CE), lantern festival celebrations lasted for three days.

Although it’s no longer the case today, the Chinese Lantern Festival was closely associated with love in ancient China. So much so, in fact, that some say that it’s the real traditional Chinese Valentine’s Day, a designation usually reserved for describing the Qixi Festival.

In ancient times, there were strict curfews that were meant to keep people inside after dark. Due to traditional gender norms, women were also generally expected to stay indoors at all times, regardless of whether or not there was a curfew in place.

During the Lantern Festival, however, curfews were lifted so people could go out at night to view the lanterns. Women were also allowed to leave the house. Thus, the holiday presented a unique opportunity for people of different genders to mingle with each other.

This romantic facet of the Lantern Festival is reflected in the plot of various Chinese operas, as well as in many works of art and literature from both the Song and Ming Dynasties. 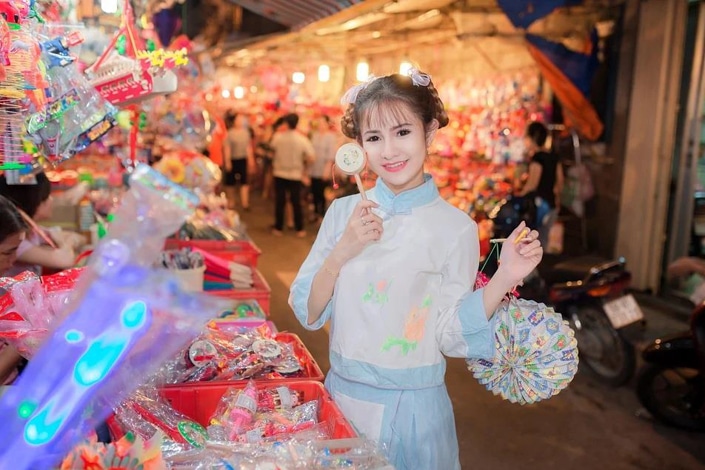 In ancient times, the Lantern Festival was a romantic holiday when people of different genders were allowed to mingle freely.

Today, the Lantern Festival is still popular, but it isn’t one of the seven official public holidays recognized in Mainland China. Therefore, people in China don’t usually get any days off from school or work for this holiday.

Nowadays, although love is no longer a main theme, the Lantern Festival is still celebrated with a variety of fun activities.

As its name suggests, the most important part of the Lantern Festival revolves around viewing and interacting with grand displays of Chinese lanterns (灯笼 or dēnglóng).

When many people think of Chinese lanterns, they imagine the round, red, basket-ball sized lanterns they may have seen hanging outside Chinese restaurants.

While this type of lantern is certainly omnipresent around the time of Chinese New Year, the lanterns involved in Lantern Festival displays are quite different. 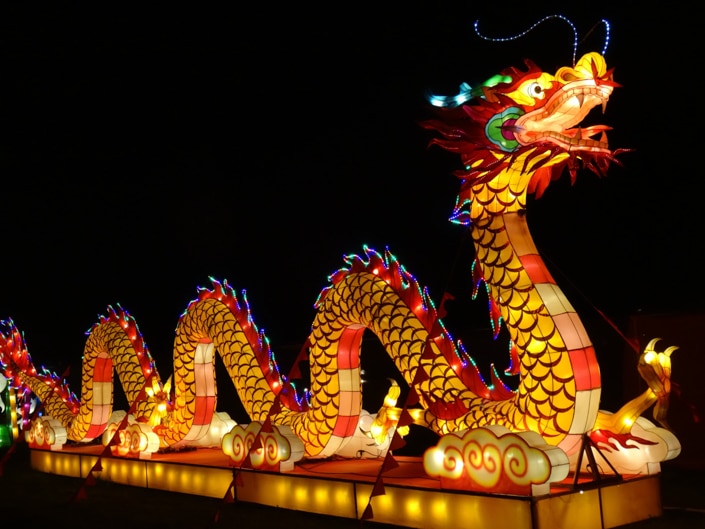 The lanterns used in modern Lantern Festival displays are often quite elaborate.

Instead of being basketball-sized, these lanterns are often enormous, with some of the larger ones measuring over 65 feet (20 meters) high and 330 (100 meters) long.

These giant lanterns aren’t usually round or red. Instead, they’re built into every imaginable color and shape, depicting real and imaginary animals like giraffes and dragons along with giant flowers, trees and palaces.

Groups of lanterns are often arranged together to illustrate famous scenes from various historical or mythological stories.

Lanterns used in lantern displays in the past were made of materials like paper, silk, bamboo, glass or jade and lit with candles from within. Today, the materials used have been updated.

Most are now made with fabric stretched over wire frames and lit with thousands of LED lights.

Iconic floating sky lanterns were often incorporated into Lantern Festival celebrations in the past and flying them was once a favorite activity for children and adults alike. Now, however, they’re considered a fire hazard and have been banned in many places both in China and abroad. 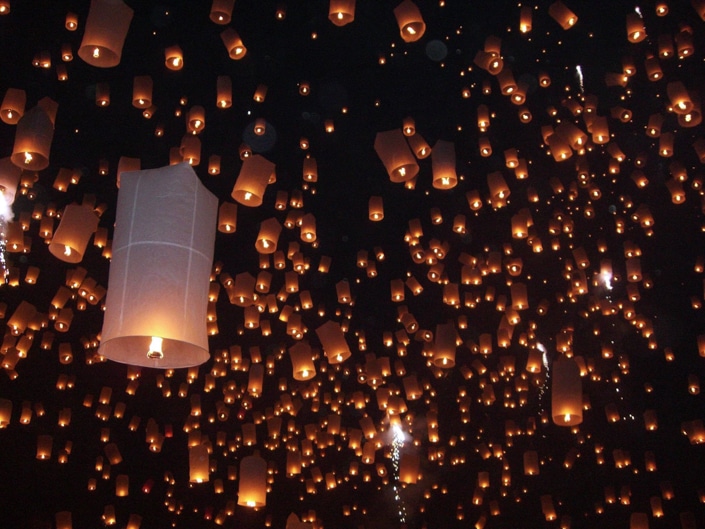 Sky lanterns are beautiful but they also pose a fire hazard.

Guessing lantern riddles (猜灯谜 or cāidēngmí) is an activity that dates back at least as far as the Song Dynasty, when scholars wrote riddles on small slips of paper and hung them from lanterns for festival attendees to guess.

Most of these lantern riddles (灯谜 or dēngmí) were simply created as a form of entertainment. Sometimes, however, imperial advisors used them to make suggestions to the emperor.

If the emperor didn’t like a suggestion, the advisors could claim that the riddle had been interpreted incorrectly, thus avoiding his wrath. This was possible because the riddles’ answers were rarely obvious and clear-cut, leaving them open to multiple interpretations. 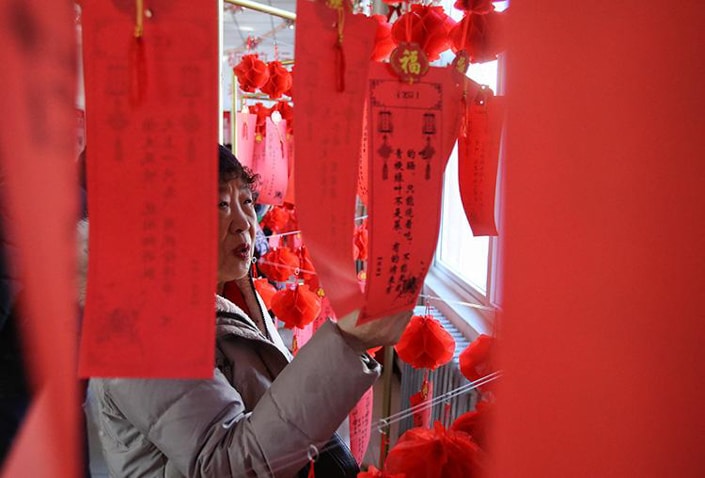 Generally, lantern riddles are based on complex forms of wordplay and may be difficult for even advanced students of Chinese to understand.

Most riddles consist of the riddle itself and a hint that tells the guesser what form he or she should expect the answer to take.

For example, sometimes the hint might indicate that the answer is a Chinese idiom (成语 or chéngyǔ), the name of a country or that it should consist of only one Chinese character.

To get an idea of how difficult these riddles are, check out this list of Chinese-language riddles.

These balls of glutinous rice flour are generally loaded with sweet fillings made from ingredients like black sesame paste. Although most tangyuan are sweet, savory tangyuan do exist.

Most tangyuan are steamed or boiled, but they can also be fried. Usually served floating in a thin hot soup, they’re traditionally white in color.

In recent years, modern versions of tangyuan have also appeared. These come in a mix of bright colors like purple, pink and orange. Creative chefs have updated the fillings, sometimes using less-traditional ingredients like chocolate.

Although they were originally only consumed on festive occasions, nowadays frozen tangyuan can be found in supermarkets throughout the year and can be eaten anytime. 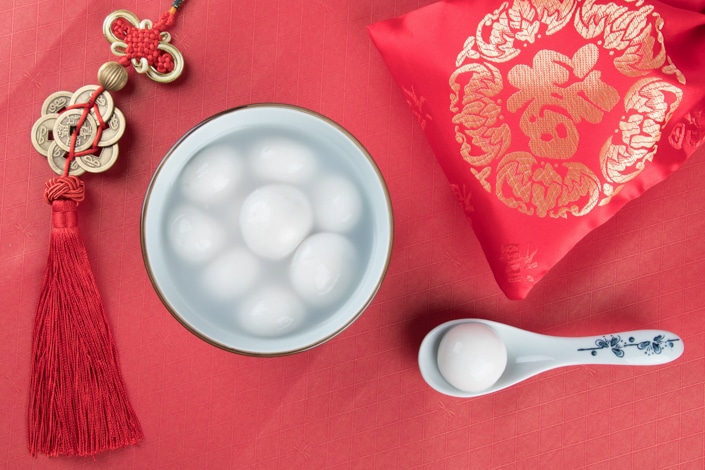 Tangyuan are a popular snack during the Lantern Festival.

The pronunciation of the word tangyuan is similar to that of the word tuanyuan (团圆 or tuányuán), which means “reunion” in Chinese. This, along with the fact that tangyuan are round and are served in round bowls, has led them to become a symbol of family togetherness.

Though there are some slight differences in how tangyuan and yuanxiao are prepared and stored, the two are quite similar.

In some parts of China, dragon and lion dances are also performed during the Lantern Festival.

Lion dance (舞狮 or wǔshī) is a type of folk dance typically performed by two dancers wearing a single lion suit. One performer controls the head and front part of the lion’s body, while the other controls the rear.

The performers dance and perform various acrobatic tricks to the beat of drums, gongs and cymbals.

Some lion dances are quite complex and may even include martial arts-inspired moves. In traditional Chinese culture, lions are considered to be powerful, auspicious animals, and lion dances are thought to bring good luck and financial prosperity. 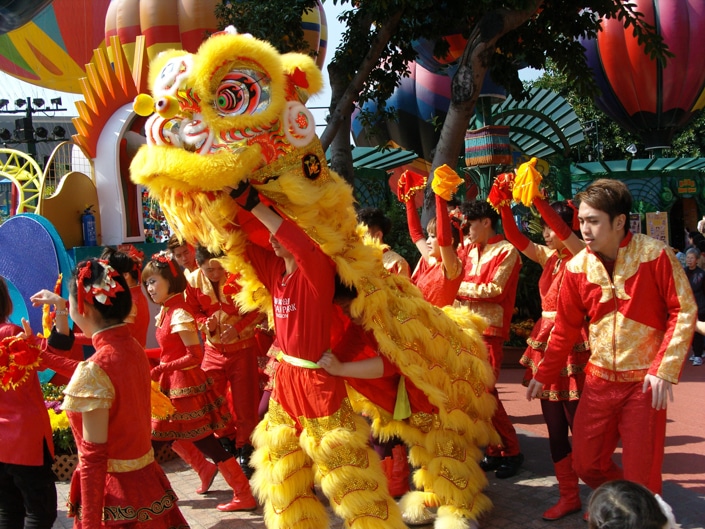 Lion dances are a popular part of Lantern Festival festivities in some parts of China.

Dragon dances (舞龙 or wǔlóng) are usually performed by a large team of dancers. Instead of getting inside a dragon costume, these performers manipulate a long, flexible model of a dragon using poles attached to its body.

Fireworks (烟火 or yānhuǒ, also called 烟花 or yānhuā) were invented in China, so it should come as no surprise that they’re still an integral part of many Chinese festivals.

Firework displays are popular during the Lantern Festival. In fact, it’s quite common to see and hear fireworks almost every day from the start of the Chinese New Year until the Lantern Festival, which marks the official end of the Spring Festival holiday.

Individuals are prohibited from setting off fireworks in most big cities, so Lantern Festival fireworks displays in urban areas are usually sponsored by local governments.

In rural areas, fireworks and firecrackers (鞭炮 or biānpào) can still be freely bought and set off by individual people, so families may set off their own fireworks on the Lantern Festival just for fun.

Sometimes, fireworks displays are combined with other aspects of the Lantern Festival, such as dragon dancing, which can make for a truly spectacular performance. 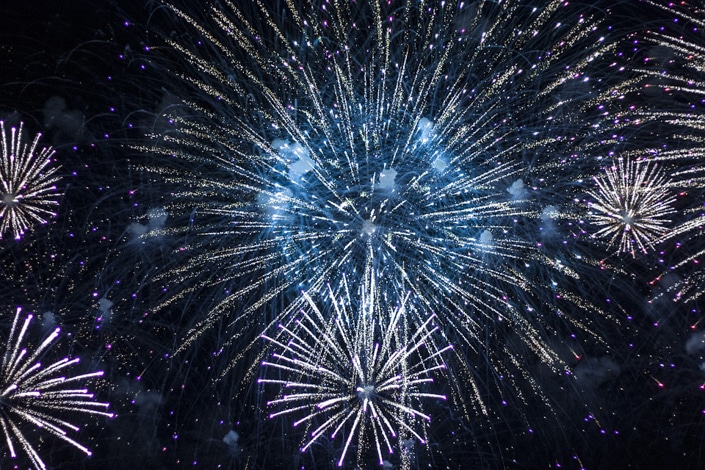 Experience the festivities for yourself!

If you happen to be in China during the Lantern Festival, make sure to take time to enjoy the celebrations.

Traveling within China during the Spring and Lantern Festivals can be hectic, but most cities will have their own lantern displays. Therefore, you probably won’t need to go far to experience the magic of this holiday.

Even if you aren’t in China, you may still be able to experience the holiday for yourself thanks to the growing popularity of Lantern Festival events in cities around the world.

If you're interested in finding out more about Chinese holidays and traditions, then check out our articles on some other festivals with a long history like the Chinese Summer Solstice or Teachers' Day.

If you're feeling stumped about what to buy your Chinese friends during the holidays, you can also check out our Chinese gift recommendations. 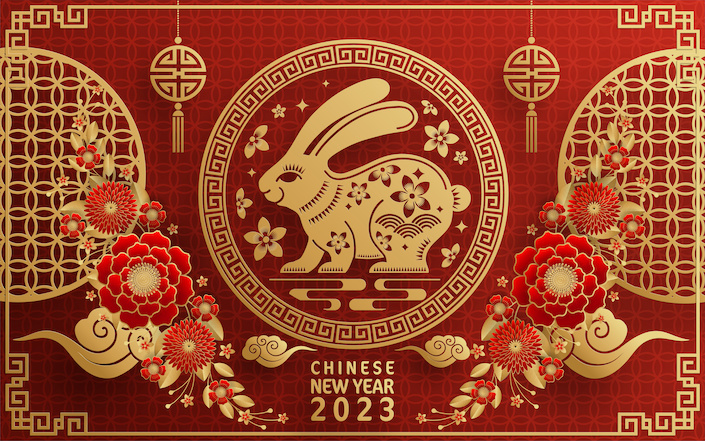